The Israeli government has teamed up with a defense contractor to invent a new material matrix that can hide soldiers from infrared sensors, making them more difficult to detect.

Polaris Defense’s Kit 300 system is a “thermal visual concealment” system that uses a combination of “metals, microfibres, and polymers” to mask a soldier’s thermal signature, according to Business Insider.

Thermal imaging technology creates a visual representation of an object via the invisible infrared (“heat radiation”) the object emits. If that object radiates heat, a thermal imager will show an image of it, with different colors representing relative levels of heat.

A warm-blooded human being, for example, will show up as a human-shaped blob, with the level of fine detail depending on the acuity of the sensor. A tank will appear as a tank-shaped object, and if the tank’s engine is running, the engine will look like a “hot” spot. 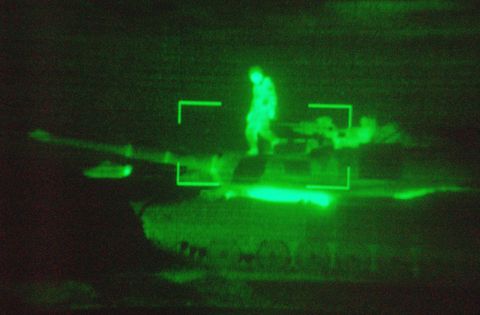 Thermal imagers are used to power modern night-vision devices. Unlike older night-vision technology, which required some source of light (even infrared light), thermal imagers don’t require any ambient light at all. They simply require a detectable level of heat to function.

This means thermal imagers can detect people, armored vehicles, and even flying aircraft on moonless nights, without infrared searchlights, and through smoke screens. The latter makes thermal imagers useful even during daylight conditions, and during the Cold War, American tanks would have easily detected and engaged enemy tanks moving through smoke screens, as though they weren’t there at all.

But the technology isn’t perfect. Objects that don’t radiate heat don’t show up at all in thermal imagers. The Kit 300 system, then, is designed to eliminate a soldier’s thermal presence, thus making the soldier “invisible”—to thermal imagers, anyway.

The materials in the Kit 300 system likely act as insulators, preventing a soldier’s heat from leaking out from behind the sheet.

The Kit 300 doesn’t stop there. A soldier could stand in the middle of a barren field invisible to thermal imagers, but still be plainly obvious to the naked eye. The system makes soldiers more difficult to spot in the visual light band by using old-fashioned colors and camouflage techniques designed to allow the wearer to blend in with surrounding terrain.