Killer robot dog mounted with sniper rifle can slaughter targets from 1.2km away 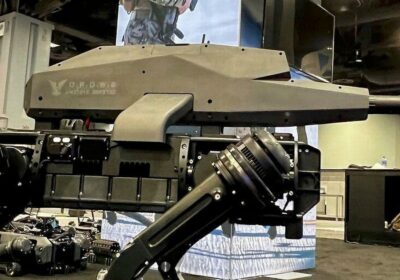 An American weapons company has left people terrified after showcasing its latest creation: an 'unstoppable' killer robot dog with a high-tech sniper rifle attached to it.

Robot company Ghost Robotics has teamed up with weapons manufacturer SWORD Defense Systems to unveil the SPUR. This 'Special Purpose Unmanned Rifle' attaches to a robotic 'quadruped', or robot dog, and can devastate military targets from as far away as 1.2km.

The gun itself is a 6.5mm Creedmoor sniper rifle, which can be operated remotely. The company said: "Due to its highly capable sensors the SPUR can operate in a magnitude of conditions, both day and night. The SWORD Defense Systems SPUR is the future of unmanned weapon systems, and that future is now."

Ghost Robotics' 'robot dog' is itself very resilient, and can't be pushed over or easily attacked.

"They're unstoppable, with the ability to get right back from any slip, fall, or failure and keep moving using our proprietary blind-mode operation," Ghost Robotics explains on its site.

People took to Twitter to share their fears, with some saying we are heading towards a dystopian Terminator-style future.

One user wrote: "In the post-apocalyptic hellscape [we're] heading towards I would be surprised if we would eventually be hunted for food by the ultra-rich using these robot dogs.

"Nothing is beneath them, when they run out of animals to eat we're next."

Others pointed towards the fact that, previously, these kinds of quadruped robot dogs were only shown in 'fun videos' online, but that the truth is now coming out.

"They look quirky and fun when they do synchronised dance routines. But less so when fitted with flesh-tearing, brutalising powerful murderous weapons," said one Twitter user.

Another said: "You are building a horrible future. Profiting off automated death. There are no words for how messed up this is. Good lord, are you raising children?"

The use of AI for weapons is highly controversial. In 2015, the likes of Stephen Hawking and Elon Musk signed an open letter to the UN demanding that autonomous weapons be made illegal.