Mars mission inspires growing fan base back in China 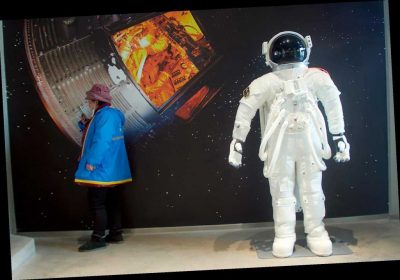 Spacecraft from NASA, China, UAE all arriving on Mars in February

BEIJING — Cui Tingting dyed her hair Mars red for the arrival of China’s spacecraft at the planet known in Chinese as the Fire Star.

“This is a great era for space and the future of mankind lies in the exploration of outer space,” said Cui, director of the China Mars Society, the local chapter of a global advocacy network. She hosted an online party Wednesday night to wait for the announcement that the Tianwen-1 spacecraft, launched last July, had reached Mars orbit.

Video from participants across China showed a replica of Tianwen-1’s robot rover in the home of one society member. One wore a homemade space suit; another controlled his robot dog.

“Earth is our mother planet … but for me, Mars is the same,” Cui said.

China is falling in love with space, inspired by the ruling Communist Party’s increasingly ambitious plans over the past two decades to launch humans into orbit and explore the moon and Mars.

The most popular space-themed account on the Twitter-like Sina Weibo microblog service, “Our Space,” has 1.25 million followers.

The expanding space program coincides with President Xi Jinping’s campaign to promote an image of China returning to its former glory as a world leader.

“It’s a symbol of power for China,” said Chen Qiufan, a science fiction author in Guangdong whose books include “Waste Tide.”

Xi’s government is trying to nurture public enthusiasm with a five-year Scientific Literacy Action Plan. It includes a promise of support for developing Chinese science fiction.

“You have to leverage the power of films, movies and science fiction to broadcast propaganda and this idea: we need to go there,” said Chen, comparing it to the Renaissance.

That love affair also is catching on in Japan, India and other countries that are sending probes across the solar system, joining a club of explorers long dominated by Washington and Moscow.

The race to explore Mars is so crowded that Tianwen-1 isn’t even the only spacecraft to arrive at the planet this week.

On Tuesday, Amal, a spacecraft launched by the United Arab Emirates, swung into orbit.

In India, one of the country’s biggest film stars, Akshay Kumar, led a 2019 blockbuster, “Mission Mangal,” inspired by the country’s first mission to Mars.

A new collection of short stories written in a half dozen languages called “The Best of World SF” captures this global wonder, said the book’s editor, Lavie Tidhar.

In American and British sci-fi, Mars often plays the pristine utopia to Earth’s decrepit dystopia, but not so elsewhere, said Tidhar, who was raised on a kibbutz, a collectivist commune in Israel. In his novels “Martian Sands” and “Central Station,” a reborn Soviet Union, China and Israel flourish on the bleak landscape of Mars.

“It’s boring, it’s hot, it’s cramped. A bit like growing up in a kibbutz -– except you can never leave,” he said.

The genre died out during the ultra-radical 1966-76 Cultural Revolution, when the US-Soviet space race inspired film studios to release “2001: A Space Odyssey” and “Solaris.”

China re-embraced imaginary other worlds with the explosive success of “The Three-Body Problem” by Liu Cixin, first published as a magazine serial from 2006 to 2010. In 2015, Liu became the first Chinese author to receive the Hugo Award, science fiction’s highest honor.

A Hollywood-style blockbuster, “The Wandering Earth,” based on a novella by Liu, grossed more than $700 million worldwide in 2019.

China became the third nation to launch an astronaut into orbit on its own in 2003, four decades after the former Soviet Union and the United States.

Its first temporary orbiting laboratory was launched in 2011 and a second in 2016. Plans call for a permanent space station after 2022.

Space officials had expressed hope for a crewed lunar mission as early as this year but said that depended on budget and technology. They have pushed back that target to at least 2024.

“We need to go to space,” said Chen, the science fiction author in Guangdong. “Then we have the power equivalent to what the United States has and then we can become the giant.”

Cui, of the Mars Society, already is planning another party in May when Tianwen-1’s robot lander is due to touch down.