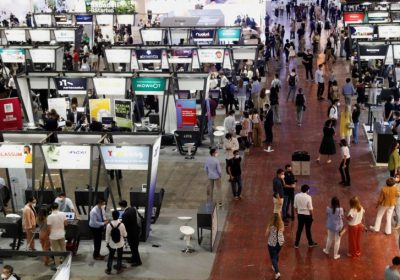 Still, telecoms bosses toasted the return of Barcelona’s Mobile World Congress (MWC) with an agenda to put the industry at the centre of digital development and inclusion in a global reboot following the coronavirus pandemic.

Having kept networks humming while people were locked down at home, telecoms executives said the pandemic had shown how vital connectivity was to those with access to the latest technology, and more so for those the billions who lack it.

Spain’s King Felipe V and Prime Minister Pedro Sanchez were on hand for the opening of the four-day MWC, one of the first big technology conferences staged in Europe since the start of the pandemic.

The event, which is usually held in February, is taking place this year both in-person at Barcelona’s main conference centre as well as digitally, with an online appearance by tech billionaire Elon Musk on Tuesday among the highlights.

Participants will only be allowed into the congress if they have a negative Covid-19 test result which is less than 72 hours old and will have to sign a daily declaration that they are in good health.

People lined up outside a testing site at the congress throughout the day to determine if they could be allowed in.

Once inside they must wear medical-grade FFP2 face masks at all times – lighter surgical masks are not allowed – and follow a one-way walking system, although arrows on the floor indicating which direction to follow were largely ignored.

Organisers have limited attendance to 50,000 as part of virus control measures, compared with a normal attendance of around 100,000. They expect 30,000-35,000 people to actually attend.

“It’s a great success on the part of organisers to be able to stage the event. Even if there was a bit of reluctance on the part of firms and visitors to come,” said Mr Samuel Norca, a mobile consultant with United States firm Amplitude who came from Paris for the congress.

The fair occupies just three halls of the congress centre this year, compared to eight in the past, with hand sanitiser dispensers distributed throughout the site.

Many major firms like Samsung, the world’s top smartphone maker, Nokia, Google, Ericsson and Facebook have pulled out of the in-person event, citing virus concerns although some will take part virtually.

China’s beleaguered Huawei, whose smartphone business has been battered by US sanctions, will be the biggest handset maker with a physical presence at the show alongside telecoms operators such as Orange and Telefonica.

Unlike in other years, no major phone maker is scheduled to present a new flagship device at the event, although some smaller Chinese firms unveiled new devices.

With the acceleration of digitalisation during the coronavirus crisis, cyber security and data governance are taking centre stage, the chiefs of Telefonica, Deutsche Telekom and France’s Orange said, adding that building trust with consumers was key.

“For too long progress in technology meant only advancement at any cost – but real progress comes when we move towards an equitable future, not when we just make shiny new things,” Orange chief executive and GSMA chairman Stephane Richard said in a keynote address from the event’s main stage.

Saddled with high debt and weak revenues, telcos are hoping to capitalise on the social credit derived from their role connecting societies and individuals during the pandemic to position themselves as the “good guys”.

“Data cannot be extricated without compensation – it’s called digital dignity,” Telefonica CEO Jose-Maria Alvarez-Pallete said. “I have a right to know what my data is worth.”

The trio also called for an overhaul of regulation in the European Union, saying fragmentation across the 27-nation bloc put them at a disadvantage against rivals like Facebook’s WhatsApp messaging service.

“Connectivity today is needed. But, in 2030, connectivity will be a human right,” Deutsche Telekom CEO Tim Hoettges said.

Mr Richard said that a third of European businesses had reported cyber attacks last year, a potentially fatal occurrence for smaller firms lacking the software to protect themselves.

“Cyber security is a constant race… no one can be protected any longer behind a closed digital wall,” Mr Richard said, a position echoed across the panel, who suggested next-generation 5G mobile networks were both a solution and risk.

Most telcos are betting big on 5G, with partnerships announced at MWC spanning the cloud, software-as-a-service and traditional mobile and broadband operations.

“In China, 5G is on the fast track of development, with the deployment of nearly 850,000 5G base stations and 330 million 5G cell phone users,” China Mobile Chairman Yang Jie said via videolink. He predicted that China’s digital economy would represent half of its gross domestic product by 2025.

The congress comes as global smartphone sales are rebounding after slumping in 2020 due to the economic havoc caused by the pandemic.

Global smartphone sales fell by 5.9 per cent in 2020 to a total of 1.29 billion units, its fourth straight year of declines, according to research firm IDC.

But IDC forecasts they will increase by 7.7 per cent this year, and continue to rise until 2025 due to pent-up demand for a new device in rich nations and a faster than expected recovery in key emerging markets.

By the end of 2025 more than two in five people around the world will live within reach of a 5G network, the GSMA said in a new report published Monday to coincide with the start of the congress.

Global tech show CES, held annually in January in Las Vegas, was held virtually this year because of the pandemic.

Organisers of the IFA consumer technology trade fair in Berlin have cancelled their September event, saying the pandemic made it impossible to stage an in-person show.