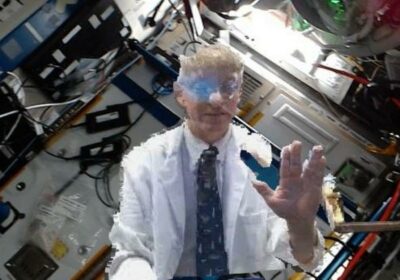 For out-of-this-world news, sign up for the Spaced Out newsletter

A NASA surgeon has gone boldly where no man has before, after the space agency beamed him up to the International Space Station as a hologram.

Using a new technique called 'holoporting', Dr Josef Schmid was able to appear on the space station as a 3D hologram and talk to astronauts in real time.

NASA plans to use this for two-way communication between astronauts and people on Earth, allowing earthlings to visit their loved ones in space and vice versa.

Dr Schmid, a leading flight surgeon at NASA, said: "This is a completely new manner of human communication across vast distances."

The holoport system works by capturing 3D models of people which are then compressed and transmitted in real time.

Astronauts on the ISS must wear a mixed reality headset, the Microsoft HoloLens, to see and interact with the holograms.

Dr Schmid said: "Our physical body is not there, but our human entity absolutely is there.

"It doesn’t matter that the space station is traveling 17,500 mph and in constant motion in orbit 250 miles above Earth, the astronaut can come back three minutes or three weeks later and with the system running, we will be there in that spot, live on the space station."

It will become very useful to astronauts who want to speak to medical advisers, VIPs, or counsellors.

The development comes as the International Space Station faces one of its greatest challenges in its history: the decision by Russia to end cooperation with the West.

Russian NASA equivalent Roscosmos said it will no longer with NASA or the European Space Agency until sanctions on Russia are lifted. These sanctions were introduced after Russia invaded Ukraine earlier this year.