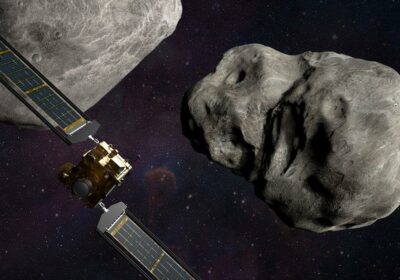 For out-of-this-world news, sign up for the Spaced Out newsletter

A daring mission by NASA to crash a $330million (£280m) spacecraft into a distant asteroid is about to come to a head, with the collision set for just a few weeks away.

NASA's mission control has begun a countdown for the impact, which is designed to test whether humanity can effectively 'deflect' asteroids away from Earth.

The Double Asteroid Redirection Test (DART) mission, which launched late last year, will crash into the 160-meter-wide Dimorphos asteroid on September 26. The objective is not to destroy the asteroid, which is harmless.

Instead, NASA want to find out if they can change its course in the vacuum of space so that if the time came, they could do the same to a dangerous asteroid or comet if it endangered Earth.

NASA's Dr Thomas Z said: "The Didymos system is not a threat to Earth, nor could we nudge it and cause it to come toward Earth.

"This is simply a test to determine if pushing an asteroid is a repeatable, viable technique we could use in the future.

"If detected at a far enough distance from Earth, even a minute change that alters an asteroid's trajectory could make the difference between an asteroid impacting our planet and avoiding it altogether."

NASA will observe the effects of the impact using powerful Earth telescopes, while the craft itself has powerful cameras and sensors to measure the crash.

The DART mission was launched by Elon Musk's SpaceX company last year, and has taken this long to reach its destination simply because of how far away it is.

If the mission is successful, it could mean Earth is protected from the kind of deadly meteors that wiped out the dinosaurs—or Leonardo DiCaprio in the Netflix hit, 'Don't Look Up'.