It’s almost time for Samsung to reveal its next Galaxy Watch. The South Korean technology firm is scheduled to hold a major event next week, where it’s widely rumoured to give fans their first glimpse at the updated wearable.

There’s already been a bunch of leaks, which suggest this device is getting a new look, more power, and some refreshed digital watch faces, but now there’s a new rumour about a feature you won’t even find on the Apple Watch.

According to a new report from 9to5Google, via XDA Developers, it seems Samsung is working to bring gesture controls to its Galaxy Watch. It’s thought this would allow users to perform numerous tasks without actually touching the watch. For example, a quick clench of your fist could instantly answer phone calls when they start ringing on the watch.

Rotating your hand can instantly mute alarms and you could even snap a photo on your smartphone using the built-in Camera Controller app simply by making a fist then opening your hand.

Although the Apple Watch has some gesture controls, such as covering the watch face with an open palm to mute calls, you certainly can’t perform any tasks via a fist clench. 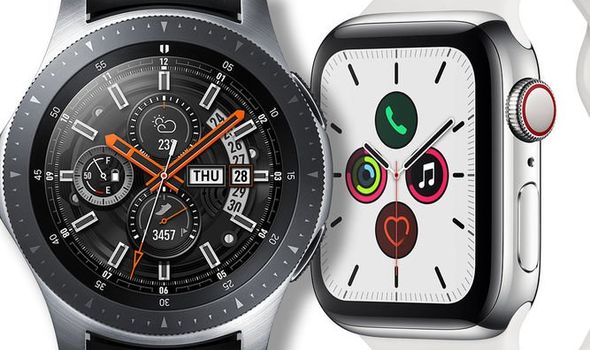 We’ll hopefully find out full details when Samsung reveals all during its Unpacked event which is being live streamed across the work on August 5.

Of course, this new watch isn’t the only device that’s likely to be on show. Samsung is fully expected to reveal its latest addition to the Note family with the Note 20 and Note 20 Ultra almost certain to be the main event. These new phones could get improved performance, better cameras and a striking design.

In fact, recent pictures of the Note 20 were spotted online and reveal a device with a much more industrial look. The photo, which appeared briefly on Samsung’s official Russian website – before being swiftly deleted, clearly show off the design.

Thought to be the more premium Note 20 Ultra, the phone in the image let slip by Samsung has a striking copper finish, industrial-style design with sharper edges and what appears to be a quad rear camera system.

The famous S Pen is also revealed in the photos and gets a matching copper appearance which adds a bit of bling to this digital stylus. Another product that could be revealed next week is an update to the Galaxy Fold.

This bendable phone may well get a reboot although it’s currently unclear exactly what Samsung has planned for this radical smartphone. Express.co.uk will bring you full details of everything Samsung reveals at Unpacked next week so watch this space.