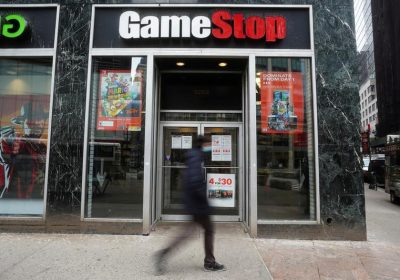 NEW YORK (Reuters) -The number of GameStop shares that were shorted fell by over half in a week as short sellers covered their bets, analytics firm S3 Partners said on Monday, although the video game retailer remained a highly shorted stock.

GameStop had 27.13 million shares shorted, down 35 million over the prior week, according to Ihor Dusaniwsky, managing director of predictive analytics at S3 Partners.

Still, GameStop short interest stood at $8.82 billion as of Friday, making it the sixth-biggest short by value, according to S3.

GameStop shares soared 400% last week alone as the stock became a prime focus of a battle between small traders and big institutions betting against the stock.

As of early Monday trading, short sellers had mark-to-market losses of $13.38 billion in GameStop so far this year, according to S3 Partners, although those losses were mitigated somewhat as the stock was down early in the session.

“Fundamental and momentum shorts have incurred very large mark-to-market losses and they have been squeezed out of their positions,” Dusaniwsky said. “We saw over the last couple of days some serious short covering in the name.”