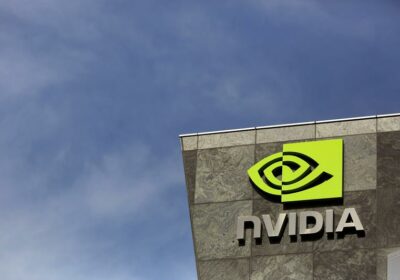 (Reuters) -Nvidia Corp forecast fourth-quarter revenue above analysts’ expectations on Wednesday, betting on growth in its data center business as more internet companies set out to invest in artificial intelligence and metaverse.

FILE PHOTO: The logo of technology company Nvidia is seen at its headquarters in Santa Clara, California February 11, 2015. REUTERS/Robert Galbraith

The online realm that uses augmented and virtual reality to help users interact has captured more attention after Facebook, now renamed Meta, said it would boost capital expenditure and shift focus from its social media business.

The move will be a big boost for Nvidia as metaverse applications would need more computing power and drive demand for chips.

The company last month released here Omniverse Enterprise, which will start at $9,000 per year, to build powerful computing systems with its chips for corporate customers.

“We showed what is possible when we can jump into virtual worlds. … This is the tip of the iceberg of what’s to come,” Chief Executive Officer Jensen Huang said in the earnings release.

The pandemic boosted demand for Nvidia’s graphic chips used in gaming consoles and computers as consumers staying at home spent more time playing video games, with support also from cryptocurrency miners. The company is also benefiting from recent efforts such as artificial intelligence chips used in data centers and those for autonomous vehicles.

The world’s biggest maker of graphics and AI chips expects current-quarter revenue of $7.40 billion, plus or minus 2%, above analysts’ average estimate of $6.86 billion, according to IBES data from Refinitiv.

The company’s shares were up nearly 4% in extended trading, after more than doubling this year.

Analysts had expected $3.13 billion and $2.75 billion for gaming and data centers, respectively, according to FactSet.

Overall, revenue rose about 50% to $7.10 billion for the three months ended Oct. 31, above the average estimate of $6.83 billion, according to IBES data from Refinitiv.