Our Digital Pasts Weren’t Supposed to Be Weaponized Like This 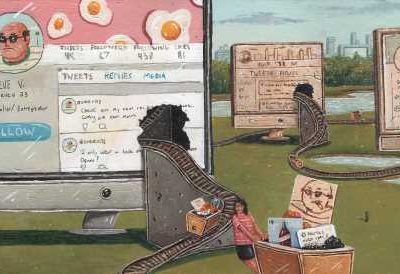 The internet is a fossil machine. It preserves our thoughts, our political positions, our jokes, our photos, our triumphs and our mistakes in silicon amber, just waiting to be dug up. And that has led to a kind of modern sport: Find an outrageous piece of a person’s past that can be weaponized, put it on display for all to see and hope for the worst.

The most surprising thing, though, is that this is still happening.

The latest target of adversarial archaeologists is Emily Wilder, 22, who was fired by The Associated Press just three weeks into the job after the Stanford College Republicans surfaced her pro-Palestine activism and social media posts while in college. Though she was based in Arizona, her old posts caught the attention of national political figures from the right who amplified them, arguing that her views compromised her employer’s ability to accurately cover the Israeli-Palestinian conflict. The A.P. contends that the firing was for social media conduct while Ms. Wilder worked for the media outlet, but it seemed to Ms. Wilder and her supporters that the incident was triggered by the years-old Facebook posts.

We’ve been living with social media — and its powers of preservation — for nearly two decades now, since Facebook came into existence in 2004 and gradually convinced a billion of us that it was a good idea to leave a digital trail online attached to our real names. This is a cycle so familiar that the progression from unearthed post to contrition or firing feels lockstep. It almost makes you forget that it wasn’t supposed to be this way. As more and more people documented their lives online, so that our whole selves, past and present, were visible, society was predicted to become more empathetic and forgiving. But instead the opposite has happened.

People were thinking about this a lot a decade ago. During an August 2010 interview, it was on the mind of Eric Schmidt, then the chairman of Google, the creator of the best fossil-digging equipment out there. Mr. Schmidt predicted, “apparently seriously,” according to The Wall Street Journal, that young people would change their names upon reaching adulthood in order to escape their digital pasts. The prediction was widely mocked for its impossibility.

The same month, another prominent data scientist, Jeff Jonas, offered a more utopian prediction: “I hope for a highly tolerant society in the future,” he wrote on a legal blog called Concurring Opinions. “A place where it is widely known I am four or five standard deviations off center, and despite such deviance, my personal and professional relationships carry on, unaffected.”

I remember this prediction because I cited it a decade ago when a 28-year-old woman had her Congressional campaign upended by a “scandal,” one that seems quaint by today’s standards but was a glimpse into our future. The woman who provided it was named, coincidentally, Krystal Ball.

Ms. Ball was running as a Democrat for a House seat in Virginia at the time; a conservative blog got its hands on decade-old photos from a post-college Christmas party, where Ms. Ball was dressed as a “naughty Santa” and her husband at the time was Rudolph with a red dildo for a nose. This sounds ridiculous, but the “raunchy party photos” fueled news stories across the world. I thought that what she was experiencing was notable for its limited shelf life: As more and more people got smartphones and flocked to apps like Instagram and Twitter that encouraged them to thoroughly document their lives and thoughts, this sort of shaming of people’s past selves would surely stop, because the throwing of stones would become hypocritical and dangerous.

Ms. Ball thought so too. She lost that long-ago Congressional race and is now a media commentator and the author of a book about the new political age. She said in a recent interview that she thought her so-called scandal would be a temporary blip before society adjusted and “that people would grow more accepting” of photos or problematic comments from the past.

“It’s the polar opposite,” she said. “It’s more reactionary and judgmental than it’s ever been.”

Why haven’t repeated calls to replace digital shaming with empathy and compassion resonated? Or at the very least, why hasn’t a fear of mutually assured destruction set in?

“I think it’s because it’s worked, so partisan operatives and actors are going to continue to use the technique,” Ms. Ball said. “They ginned up this outrage to get Emily Wilder fired. And then they have the temerity to cry about ‘cancel culture.’”

That is the current phrase used by the political right to describe punishing people for “wrongthink.” According to Pew, a majority of Americans are now familiar with the term, but feelings are mixed about whether it’s beneficial, leading to a more accountable society, or a cruel form of punishment, willfully taking people’s actions out of context.

Part of the problem is how time itself has been warped by the internet. Everything moves faster than before. Accountability from an individual’s employer or affiliated institutions is expected immediately upon the unearthing of years-old content. Who you were a year ago, or five years ago, or decades ago, is flattened into who you are now. Time has collapsed and everything is in the present because it takes microseconds to pull it up online. There is little appreciation for context or personal evolution.

And it’s not just happening to journalists and politicians, whose jobs invite frequent public musings, but to high school students and business executives, because we are all now online so much of the time.

Some see the benefit in this shift. In the same Pew survey, of over 10,000 people, more than half approved of calling out people for their behavior on social media, saying it helps hold people accountable. “People look closer at their actions, forcing them to examine what they are doing, why they are doing it, and what are the consequences of said actions,” said one of the people surveyed.

Ms. Ball remains hopeful that things will change. “The reactionary culture is damaging and unhelpful and just really brutal for everybody involved,” she said. “A lot of our society wants to see ourselves as believing in forgiveness, believing in redemption, believing in the ability of people to learn and grow and get better.”

She pointed to the backlash against Ms. Wilder’s firing; dozens of staff members wrote an open letter to The A.P. expressing dismay.

“The less successful it is, the less that it works,” she said, “the less interest in it people are ultimately going to have.”

After a pause though, she added: “A lot of that comes down to how corporate H.R. departments handle themselves, which is not a great place to place your hopes.”

For Ms. Ball herself, the unearthing of her party pics, and resulting “scandal,” ultimately provided a professional boost. Cable news programs invited her on air to talk about it, and then, impressed at her performance, invited her back to comment on other political happenings, leading to her current role.

“I was very fortunate,” she said. “The only reason I ended up with a career in media was because of this attempted, like, cancellation.”