Here’s the problem with buying cheap Bluetooth speakers; you won’t know if they sound good or bad until you own them, because you can’t listen first. At retail they’re usually shrink wrapped and hanging on pegs, and when you ask for a listen salespeople look at you like you’ve arrived from Mars.

Even if you score a listen the places that sell them are usually too crowded and noisy for a proper assessment anyway. As for comparing one against another, no way. So you have to go by appearances, brand and intuition. Weight is good too, the heavier the better. 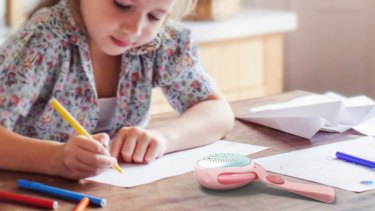 The JR Pop is a $50 Bluetooth speaker kids might like, but don’t expect sound that inspires a lifelong love of music.

This was much on my mind when I received JBL’s JR Pop for a listen; would I buy one if I couldn’t listen first? The JR Pop is a Bluetooth wireless speaker made for kids and it costs $49.95. It’s gives up to five hours of playing between charges and it’s waterproof; it can be immersed to a depth of one metre for 30 minutes without damage. That’s fresh water by the way, its rating does not cover the stuff washing into the beach.

So, appearance, brand and intuition. It looks good. It’s nicely made, solid and there’s a sturdy strap and clasp to attach it to a belt or backpack. No worries with brand; JBL has been making speakers since 1927 when James Bullough Lansing and Ken Decker started the business. It was a pioneer of movie sound and has made a number of iconic speakers including its best-selling L100 of 1970, which was recently re-born as the L100 Classic and immediately won the Judge’s Choice Award at the Sound and Image Awards.

Intuition? The flashing lights worry me a little, not because they’re happy and colourful, but because they cost money that could go into improving the sound. They shorten battery life too.

Thus when looking for a Bluetooth speaker without listening first the JR Pop ticks the right boxes. But I’m a reviewer and I get to listen first, so does it live up to its promise? 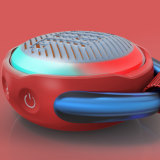 The JR Pops lights are great for razzle dazzle, not great for battery. But they can be switched off.

The first song I play is a rocking number with lots going on, Invisible Touch by Genesis, and it sounds terrific. Maximum volume is loud enough to be heard clearly in a noisy environment, not loud enough to hurt anyone’s ears. More challenging tracks reveal a propensity towards high range sound. When strong bass happens it tends to get muddled and poorly defined, probably not enough to worry kids unless they’re listening closely. Kids, I suspect, seldom listen closely.

Also being a reviewer, I get to compare it. I put it against Sony’s XB12, the more expensive replacement for the XB10 which was one of the great bargains of hi-fi. With enough volume to fill a hotel room and up to 16 hours between charges I don’t go anywhere without mine.

The XB12 has deeper and better defined bass than the JR Pop. It has more powerful mid range and a stronger body. It’s bigger, about the size of a sawn-off drink can, heavier and similarly waterproof, but is less suited for carrying around than the JR Pop, although it does have a detachable strap. The sound quality is worth every cent of the extra money it costs (RRP is $79) and, unlike the JBL it has a 3.5 mm auxiliary input.

If your kid wants something for the playground that will take some knocks and impress the other kids the JBL is it. But if you want to foster enjoyment of music, maybe even a love of music, spend the extra.