With glossy looks, impressive hardware and plenty of innovative features, the Portal is a handy and easy-to-use video calling device for keeping in touch with family and friends. As long as you're fine with inviting Facebook even further into your life.

With a seemingly ongoing stream of controversies and concerns surrounding the social networking giant's collection and handling of personal information, as well as its business model and political impact in general, we likely all know people who have deleted their Facebook account or refuse to create one. There's no getting around it: you need an account to use Portal, and everyone you call needs to have an account too, and for some people that's going to be a non-starter. 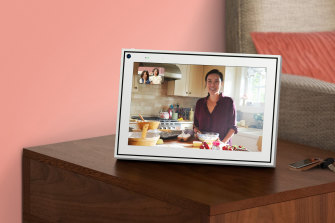 The Portal’s primary purpose is making video calls over Messenger or WhatsApp.

I've primarily been using the $279 standard Portal; a handsome picture frame in black or white with a 10-inch HD touchscreen in the middle and a clever stand that routes the power cable and can support the device in portrait or landscape orientation. There are also smaller, larger and TV-connected versions.

Most of the time the Portal is literally used as a photo frame, and like Google's smart displays it automatically adjusts its brightness and colour to blend in with your home as much as possible. Images are pulled from your Facebook and Instagram account as well as from your favourite family members and friends. Alternatively you can upload photos using an app.

Calling someone is as easy as touching their face on the device's home screen, or you can say "Hey Portal, call Bill".  You can of course make calls to people with other Portals, but it also works if they have the Whatsapp or Messenger apps on their phones or are logged into Facebook on the web. 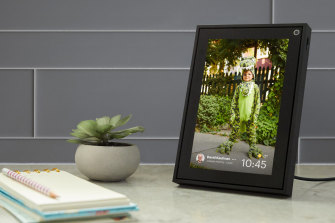 The Portal Mini is slightly smaller. Both models can display images of friends and family from Facebook or Instagram when not in use.

Portal offers easily the slickest video calling experience of any smart display on the market, with its 114-degree camera digitally panning and scanning as though directed by a real cameraman. It will keep you in frame perfectly as you move around the room, and its mics are sensitive enough to keep your voice at a good volume even if you're far away. If you have more than two contacts in the call, the display will cut smoothly to people as they're talking before returning to the split display featuring everybody.

As anyone who's used Messenger for video calls might expect, there's a range of filters, masks and games here that layer digital images over the video feed using augmented reality. It's purely for optional fun, but offers another way to engage with the people you're talking to, especially if they're kids. There's also a built-in app for reading bedtime stories, which features themed animations and filters as well.

Finally Portal has Alexa built in, so if you connect an Amazon account you can control your smart home or ask to listen to music, and the stereo speakers and woofer do a better job at this than I expected. In terms of video services there's really only Facebook Watch, which isn't ideal, and a web browser you can point wherever you like.

In a vacuum this would be an easy-to-recommend device, as it looks good, works well and offers a seamless in-home solution to hands free video calling. But considering how often Facebook is in the news for contentious approaches to content and data, whether you want one in your home will come down to how you feel about exposing yourself and your friends to yet another vector.

The portal has a switch to turn the microphone off and a physical camera cover, and in general I don't believe Facebook is in the business of literally spying on people's homes or conversations. But even if the only data being sent back to HQ regards how often you call people and for how long, and what other features you use, that's still an extra pile of information on top of the massive pile feeding into the Facebook algorithm from apps and the web. And if you ever do decide to cut yourself off from the company, it will be that much harder if you rely on it to check in with your parents, kids or friends.

A lot of people are aware of Facebook's data practices and are still ok with using the company's services for certain things, myself included, and for those people this could be a great alternative to Google and Amazon's smart displays, which force you to use the much less ubiquitous Allo and Alexa video calling services.

But there is also a background level of discomfort that comes with a physical Facebook device being in your home, unable to be deleted as easily as an app or message history, a reminder of the unerasability of all the data the company collects.