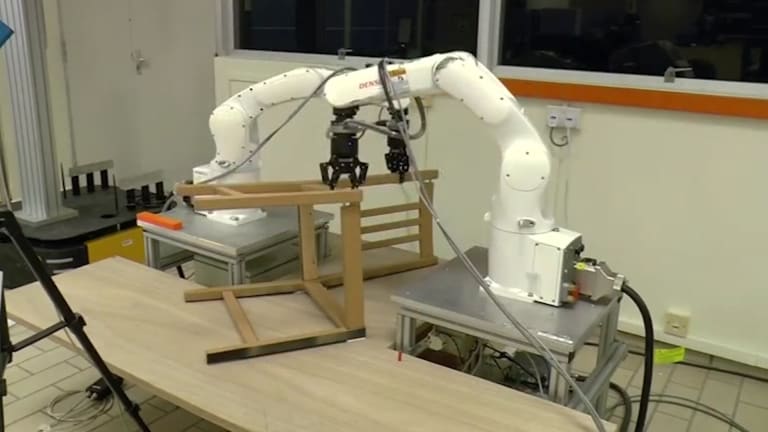 The robot shows how it’s done.

They say it may not be long before such robots can fully assemble a piece of furniture from a manual, verbal instruction or by just looking at an image of the finished item.

The researchers programmed their robot to create and execute a plan to piece together most of the chair on its own, calling on a medley of human skills to do so. The researchers explained their work in a study published Wednesday in the journal Science Robotics.

"If you think about it, it requires perception, it requires you to plan a motion, it requires control between the robot and the environment, it requires transporting an object with two arms simultaneously," said Dr Quang-Cuong Pham, an assistant professor of engineering at the university and one of the paper's authors.

"We have achieved the low level capability to teach the robot how to do it and then, in the next five to 10 years, high level reasoning – the 'what to do' – could be done too," Pham told Reuters. 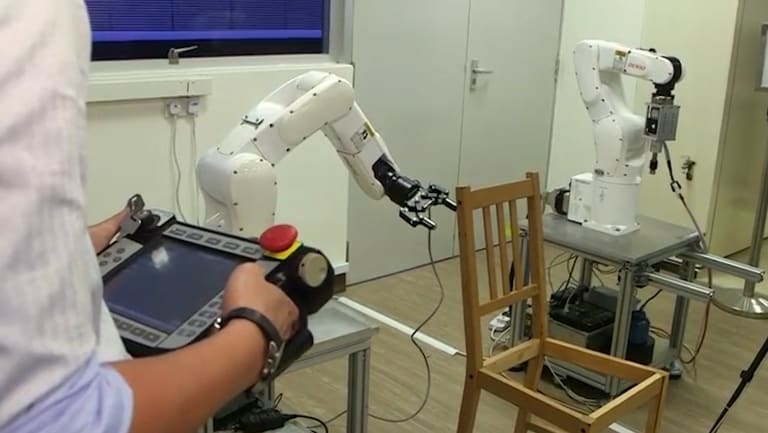 Pham said the team at NTU were looking to work with artificial intelligence experts to try to hone the process.

He and his Nanyang colleagues who worked on the study, Francisco Suarez-Ruiz and Xian Zhou, are not alone.

In recent years, a handful of others have set out to teach robots to assemble IKEA furniture, a task that can mimic the manipulations robots can or may some day perform on factory floors, and that involves a brand many know all too well.

"It's something that almost everybody is familiar with and almost everybody hates doing," said Ross Knepper, an assistant professor of computer science at Cornell University, whose research focuses on human-robot interaction.

Chairs – with backs, stretchers and other parts – pose a complex challenge; hence the interest of the Nanyang researchers.

Their robot was made of custom software, a three-dimensional camera, two robotic arms, grippers and force detectors. The team chose only off-the-shelf tools, to mirror human biology.

Like humans, the robot had a little help to start. It was fed a kind of manual, a set of ordered instructions on how the pieces fit together. After that it was on its own.

The robot proceeded in three broad phases, spread out over 20 minutes and 19 seconds.

First, like humans, it took some time to stare at the pieces scattered before it.

The robot spent a few seconds photographing the scene and matching each part to the one modelled in its "manual".

Then, over more than 11 minutes, the robot devised a plan that would allow it to quickly assemble the chair without its arms knocking into each other or into the various parts.

Finally, it put the plan in motion over the course of nearly nine minutes. The robot used grippers to pick up the wooden pins from a tray and force sensors at its "wrists" to detect when the pins, searching in a spiral pattern, finally slid into their holes. Working in unison, the arms then pressed the sides of the chair frame together.

Of course, the robot did not succeed right away. There were several failed attempts along the way and researchers tweaked the system before the robot was finally able to assemble the chair on its own.

The accomplishment was the culmination of three years of work, but the team is eager to see what else it can automate, Pham said.

Cindy Andersen, global business area manager of kitchen and dining at IKEA, told Britain's Daily Mail newspaper: "It's interesting to see an example of how robots could potentially contribute to our vision of creating a better everyday life for many people.

"We are very positive about embracing new technology."

Singapore has been pushing businesses to invest in automation and robotics to boost productivity as it keeps a tight leash on cheap foreign labour.

Some restaurants and hotels in the city-state use robots to deliver food to customers and collect used plates and cutlery.