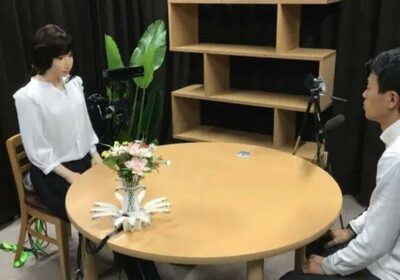 Your dad might finally have someone to laugh at his bad jokes—in the form of a laughing robot called Erica.

Researchers at Kyoto University are creating an AI system called 'Erica' which is designed to react to different kinds of humour with laugher.

Erica can chuckle, 'social laugh', 'solo laugh', or ignore your jokes entirely thanks to a sophisticated natural language AI.

The team behind the research hope that having a grasp on human humour could be the key to giving robots 'personality' and make interactions with them more realistic. Dr Koji Inoue said: "We think that one of the important functions of conversational AI is empathy. So we decided that one way a robot can empathise with users is to share their laughter."

Dr Inoue's team gathered data from 80 'speed-dates' between male students and the robot. They then labelled this dialogue for 'solo laughs', 'social laughs', and proper chuckles.

After teaching this to Erica, the team got 130 volunteers to rate the laughter for its empathy, human likeness, 'naturalness', and understanding. Inoue argued that laughter can help robots have a personality. Dr Inoue said: "We think that they can show this through their conversational behaviours, such as laughing, eye gaze, gestures and speaking style."

"They're not sentient but they might get very good at making you believe they understand what's going on."