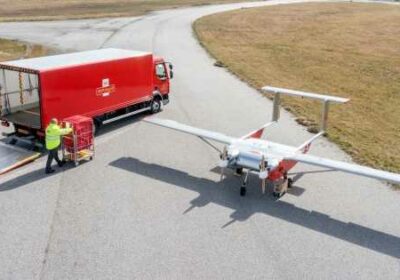 A postman's job could be about to get much easier, thanks to a fleet of flying delivery robots.

Royal Mail is gearing up to launch 500 autonomous flying drones to deliver the post to remote areas of the UK.

Following successful trials in the Shetland Islands, the UK postal service wants to initially use 200 artificial intelligence-powered robots to provide better service to remote communities in places like the Isles of Scilly, Orkney, and the Hebrides.

Luckily, the drones won't be replacing the local postman, as they don't deliver directly to the door. Instead, they will make it easier for postal workers to do their job.

If successful, the postal service will eventually scale up the number of drones to 500.

The drones, which were originally designed to deliver aid in Africa, look like small planes and are able to steer themselves.

Chris Paxton, head of drone trials at Royal Mail, told the BBC that the drones are "very much like a small plane" but without a pilot onboard.

"They are able to take off in a relatively short space and land in a similar short area. So they are capable of landing on fields, providing the area is flat enough."

Currently, the remote areas in question rely on ferries and emission-heavy aircraft to get letters and parcels to residents.

Royal Mail is still awaiting approval from the Civil Aviation Authority, which will ultimately determine whether drones can become a permanent fixture of Royal Mail's delivery services.

If successful, other more populated areas of the UK could also begin to receive their post by drone.

Royal Mail is not the only company to trial drone deliveries in the UK. Amazon Prime Air was launched in 2016 to test whether delivery drones could provide 1-hour delivery to Amazon customers.

However, more than 100 employees have reportedly been fired from the organisation as Amazon seemingly winds back its drone efforts.