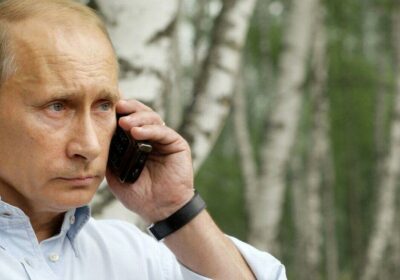 Struggling Russians are having to turn to mobile phones not used for 20 years as their own attempts at making smartphones and operating systems have “failed” miserably, officials have claimed.

As soon as Russian troops set foot into Ukraine almost one year ago, tech giants Google and Apple all but pulled all of their services out of the country.

And while phones already purchased and functioning there will still work, all connected services and software updates have been cut off or cancelled.

This set officials into a panic and tech geniuses inside the country tried to make their own operating systems and phones – and it is now being reported the attempts have gone wrong.

According to an investigation by pro-Putin, Kremlin-loving Moskovskij Komsomolets, Russians are now turning to old phones such as Nokia 3210s etc which work without any form of real operating system – although it was known as Series 20 UI when it was first released in 1999, 24 years ago.

Confirmation of this came from the Deputy Chairman of the State Duma Committee on Economic Policy Artem Kiryanov.

He said: “Our attempts to make operating systems, to put it mildly, are not encouraging.

“We had Tigafon, the production of which turned out to be unprofitable.

“Smartphone Rostec also did not win the hearts of Russians.

“Perhaps you need to ask marketers involved in the promotion of these devices why the Russians do not know anything about domestic phones.

“In the coming years, it is required to develop our own smartphones, which would not be ashamed to hold in our hands.”

And Herman Klimenko, chairman of the board of the Digital Economy Development Fund concurred.

He said: “Formally, we can already say that the Russians walk with 'bricks'.

“The situation now is almost the same as in the 1990s, when goods were brought to Russia by shuttles.”