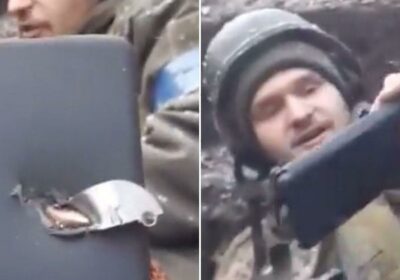 A Ukrainian soldier's life was saved by his smartphone case after being shot during a skirmish with the Russians.

War correspondent OSINTtechnical shared a video on Twitter of the anonymous Ukrainian soldier showing how his Samsung Galaxy S20 Ultra stopped a bullet.

Lying in a trench, the soldier pulls the phone out of his pocket and turns it around to show the camera. A 7.62 caliber bullet is embedded in the back of the phone, where it was safely lodged and left the soldier unharmed.

Twitter users have identified the case in question as the S-View Flip Cover Case, an official Samsung phone case which can be bought on Amazon for £22.

The soldier also had a dog tag in his pocket which helped stop the bullet, and he reportedly credits both the phone and the tag in saving his life.

However, he might need to buy a new phone as the one that saved him no longer appears to work.

The Samsung Galaxy S20 Ultra costs around £750 in the UK, and was the company's flagship phone for some years.

It's not the only gadget which has unexpectedly stopped a bullet lately.

An 18-year-old gamer based in California survived a stray bullet that came through his bedroom window thanks to his headset.

Speaking with CBS news Jonathan Gonzalez, 18, recalls playing PlayStation with his friends shortly after midnight when he felt something hit him on his head.

“It felt like if you’re wearing a bike helmet and someone just smacks the top of your head,” Gonzalez said in a TV interview.

Remarkably the reason Gonzalez survived appears to be because the bullet in question ricocheted off his Razer Kraken gaming headset.