Schlock and awe in interactive horror show made for movie nights Improving on the interactive horror setup of 2015’s superlative Until Dawn by making it easier to enjoy the spine-tingling spooks with friends, The Dark Pictures Anthology: Man of Medan is the first in a series of playable, co-operative tales from the proven masters of the macabre at Supermassive Games.

Man of Medan will be very familiar in look and feel to anyone who played Until Dawn, as you guide a gang of sexy young adults — rendered in shiny and impressively cinematic fidelity — through terrifying situations by exploring, making choices and hitting timed button presses. When the credits roll any number of them could be alive or dead, depending on how you play. 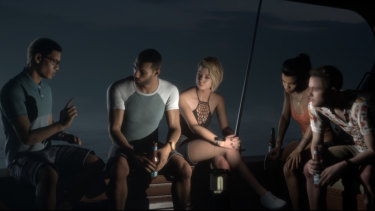 The cast of Man of Medan hits a perfect teen horror movie tone.

The story this time is of the ghost ship variety. Rich kid Julia and her jock boyfriend Alex are out at sea to illegally explore a previously undiscovered wreck, along with their respective brothers spoilt brat Conrad and buff nerd Brad. Then there's Fliss, the local boat captain the Americans have hired to ferry them, who pulls double duty as mysterious woman with unknown past and superstitious foreigner. It's a great collection of horror movie archetype, portrayed really well by a group of vaguely recognisable actors.

The crew end up getting more than they'd bargained for on their expedition, when coordinates they find in the wreck end up leading to an abandoned WWII cargo ship, still afloat and seemingly inhabited by things that shouldn't be alive. Oh and there's also violent pirates.

It must be said that the story here isn't quite as good as Until Dawn. The intro's slow and the ghoulish threat is a little more straightforward than the previous game's murder mystery. But the guts of the format is the way it evokes the schlock of a cheesy horror movie while putting the stress of decision-making and escape onto the viewer, and it works every bit as well here as it did before.

Your decisions make a real impact on the narrative as it twists and turns, and certain key story beats are cleverly telegraphed so you know you've just passed a sliding door moment. Sub-plots are also charted in the pause menu, so you can dwell on all the connections you missed and plan for your next play-through.

Early decisions include whether or not one character encourages another to propose to his girlfriend, or whether one surfaces dangerously quickly from a dive to help her friends, and these set events in motion that can go all the way through to affect the ending.

It isn't always as simple as choosing between multiple options though. For example you might try for a high-risk solution and fail the requisite button-pressing to achieve it. In many situations doing nothing is also a valid option, even if the game tries to goad you into action with count-down timers and flashing reticles. Similarly cruel, in situations where you need to stay still and quiet, the game forces you to tap buttons to the beat of your character's ever quickening heart-rate to prevent a fight or flight response. 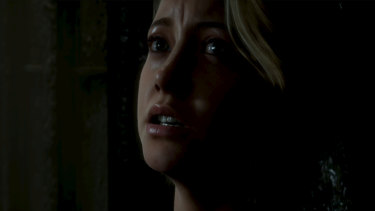 The performances are campy and the characters kind of unlikable, but in a good way.

There's a great balance here between quieter exploration, character moments and action, and in true horror anthology fashion the chapters are occasionally preceded by commentary from "the curator", an omniscient old goth who mocks your progress and offers hints.

You can play the game on your own, but all the secrets and high-stress decision making makes the experience (like horror movies) best experienced with friends. Man of Medan leans into that with two distinct multiplayer modes. 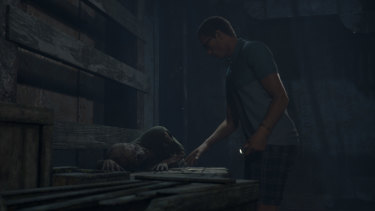 You can spend a lot of time exploring and reading documents that flesh out the story, which may or may not annoy your multiplayer partners.

Shared Story is an online game for two players where you each control a different player concurrently. Sometimes you're in the same area, sometimes not, but the game frequently finds creative ways to have you accidentally impacting or screwing over your partner. You can't talk to each other while you play so, like seeing a movie at the cinema, you have to wait until it's done to compare notes.

Meanwhile Movie Night is for up to five players. You assign each character to a player and are prompted to hand the controller over when the scenes shift. Having each player taking care of their own person brings an interesting edge of self-interest that can colour the decision-making, although it's a bit disappointing if your character bites the dust halfway through.

Though much shorter than its predecessor (lasting as long as around two standard films), Man of Medan is almost as rich in complex sub-plots, branching character paths, hidden secrets and different endings, making multiple play-throughs hard to resist. Supermassive already proved that adapting horror movie tropes to an interactive format can make for exhilarating results, and the move to an anthology format is off to a wicked start.

The Dark Pictures Anthology: Man of Medan is out now for Xbox One (reviewed), PC and PlayStation 4.