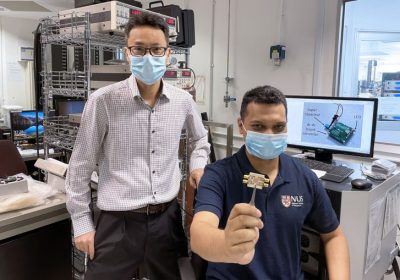 SINGAPORE – Charging your smartwatch or medical implant wirelessly in the future could be as simple as being near a Wi-Fi router, after a recent breakthrough.

A team of researchers from Singapore and Japan has found a way to use very tiny devices to convert Wi-Fi signals into electricity to power small lights called LEDs.

This is possible as long as they are within range of Wi-Fi signals, which can be up to 100m.

For medical implants, the technology could do away with undergoing surgery every time an implant’s battery needs to be replaced.

The Wi-Fi energy harvesting technology could also help power sensors, such as those in buildings for environmental monitoring and other smart city applications.

Professor Yang Hyunsoo, one of the researchers involved from the National University of Singapore’s (NUS) department of electrical and computer engineering, said the team has received many queries on the research. A number have come from the medical field, where there is interest in tapping the technology to power neural device implants.

“We are surrounded by Wi-Fi signals but when we are not using them to access the Internet, they are inactive. And this is a huge waste,” said Prof Yang.

“Our latest result is a step towards turning readily available (Wi-Fi signals) into a green source of energy, hence reducing the need for batteries to power electronics that we use regularly.”

The team of eight researchers from NUS and Japan’s Tohoku University took almost three years and spent $1 million on the research.

Using commercial manufacturing processes, it may be possible to fit one billion to 10 billion of these small oscillators into a 1cm square chip, said Prof Yang.

By tapping how sub-atomic particles called electrons spin, the oscillators can convert electricity into a Wi-Fi signal.

The devices can also do the reverse to convert a Wi-Fi signal into electricity, which is what the researchers explored.

Prof Yang said that while semiconductors can convert radio waves into power, Wi-Fi signals – which occupy the 2.4GHz radio wave band – are just too weak and low-powered for semiconductors to harvest energy.

But the researchers found that spin-torque oscillators are better at this. They developed an array containing eight oscillators arranged in an optimal way. When exposed to Wi-Fi signals, the array was able to charge another device for five seconds to power a 1.6 volt LED for a minute.

The researchers are looking at improving the energy harvesting ability of the technology and plan to test it for wirelessly charging electronic devices and sensors.

Prof Yang said that based on the small size of their energy harvester and small amount of Wi-Fi energy used, the technology does not affect Wi-Fi communication.

As the harvester cannot decode encrypted Wi-Fi signals, there should be no worries about snooping on the signals too, he added.

Mr Chang Sau Sheong, chairman of The Institution of Engineers, Singapore’s infocomm technology technical committee, said that while harvesting power from radio frequency signals, including Wi-Fi, is not a new concept, the Singapore-Japan research is novel.

This is because the approach used is different, he added.

“The amount of energy harvested using this method is usually small but it would be very useful to power Internet of Things devices, in particular small sensors that require very little energy to function.”