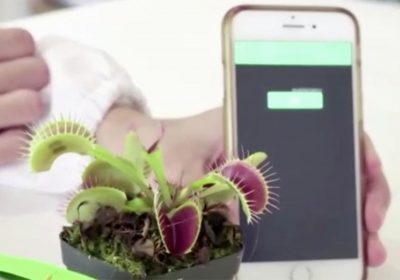 Run out of milk? Robots on call for Singapore home deliveries

Researchers in Singapore have found a way of controlling a Venus flytrap using electric signals from a smartphone, an innovation they hope will have a range of uses from robotics to employing the plants as environmental sensors.

Luo Yifei, a researcher at Singapore’s Nanyang Technological University (NTU), showed in a demonstration how a signal from a smartphone app sent to tiny electrodes attached to the plant could make its trap close as it does when catching a fly.

“Plants are like humans, they generate electric signals, like the ECG (electrocardiogram) from our hearts,” said Luo, who works at NTU’s School of Materials Science and Engineering.

“We developed a non-invasive technology to detect these electric signals from the surface of plants without damaging them,” Luo said.

The scientists have also detached the trap portion of the Venus flytrap and attached it to a robotic arm so it can, when given a signal, grip something thin and light like a piece of wire.

In this way, the plant could be used as a “soft robot”, the scientists say, to pick up fragile things that might be damaged by industrial grippers, as well as being more environmentally friendly.

Communication between humans and plants is not necessarily entirely one-way.

The NTU research team hopes their technology can be used to detect signals from plants about abnormalities or potential diseases before full-blown symptoms appear.

“We are exploring using plants as living sensors to monitor environmental pollution like gas, toxic gas, or water pollution,” said Luo, who stressed there was a long way to go before such plant technology could be used commercially.

But for Darren Ng, an enthusiast of the carnivorous plants and founder of SG VenusFlytrap, a group that sells the plants and offers care tips, the research is welcome.

“If the plant can talk back to us, maybe growing all these plants may be even easier,” he says.