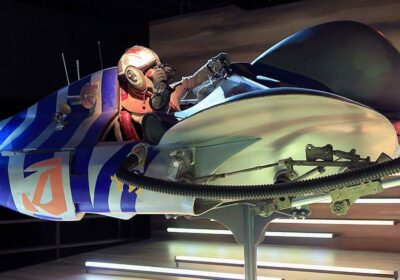 Potholes could become a problem of the past, if one Japanese startup has anything to say about it.

The XTURISMO looks a bit like a flying jetski with four large fan blades around it to enable vertical take off and landing.

READ NEXT: GTA 6 is 'well underway' and will set benchmark for entire series, according to Rockstar

Riders simply have to lean forward to make the bike move forward and park it on the pavement, just like a car.

The only problem with the hoverbike is that it doesn't fly very high currently, and is more like a floating road vehicle than an aircraft. This is something the company behind the bike seeks to address.

On top of that, flying vehicles aren't yet legally permitted for use on the roads, and so you could face legal consequences for driving it in public.

This isn't the first flying vehicle to be announced in Japan. SkyDrive, a Tokyo-based company, aims to launch a flying car service in the city by 2025.

SkyDrive has developed an eVTOL which can take off and land vertically using electric engines, meaning emission-free flights that don't require a runway.

In the US, NASA has begun supporting real-world testing of flying cars by working with Californian company Joby on flight safety trials for their 'air taxi'.

The air taxi can fly 150 miles and soar through the air at up to 200mph, saving a lot of time over a car.