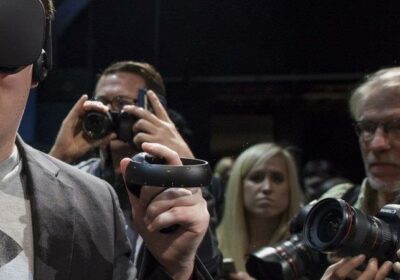 Repeat billion-dollar start-up founder Palmer Luckey, who sold his pioneering virtual reality company Oculus to Facebook in 2014, has castigated socially minded investment funds for failing to include the defence and nuclear energy industries in their portfolios.

Luckey, 29, who went on to found the military technology firm Anduril in 2017, is determined not to get involved in political stoushes outside his industry despite his reputation as a political maverick among the generally liberal technology industry. 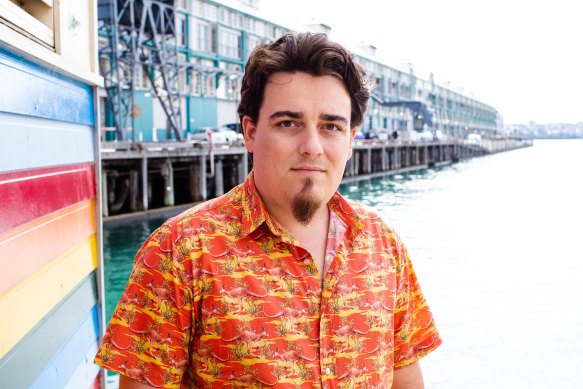 Palmer Luckey is on a charm offensive in Australia, down to his kangaroo-themed shirt.Credit:Edwina Pickles

He has reason to be wary: in 2017 Luckey was fired from Facebook. At the time Facebook said personnel issues were confidential but that Luckey’s departure “was not due to his political views”.

Luckey disagrees, saying he was forced out because he donated “$US9000 [$12,700] for one billboard that was critical of Hillary Clinton” (It read: “Too big to jail”) around the time of the 2016 US presidential election, despite other technology executives giving vastly larger political donations.

“We are very outspoken about the political causes that are related to our business and what it’s doing,” Luckey says, sitting at Harry’s Cafe de Wheels in inner Sydney with the Garden Island naval base strategically behind him.

“But something like Roe v Wade, it’s just in a different sphere. And I think some companies will take a stance on that. I’m actually fine with that … but it’s not what my company is going to do,” says Luckey, who identifies as a libertarian-leaning Republican Party member, but emphasises politics occupy a very minor amount of his time. 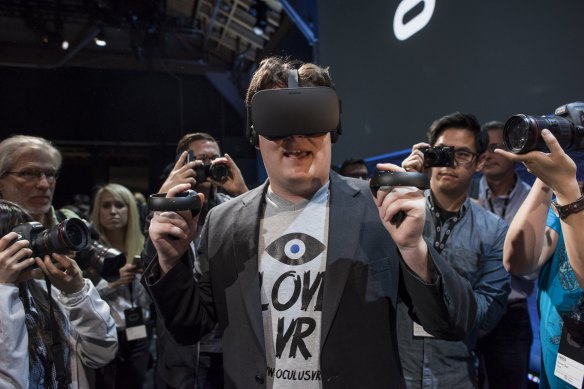 Palmer Luckey demonstrates an Oculus system at an event in 2015.Credit:Bloomberg

Luckey’s determination to stay neutral puts him at odds with many in the technology sector who pursue an avowedly socially progressive outlook. Australian technology firms including Atlassian, which makes workplace collaboration software, hit out at the decision by the US Supreme Court to reverse constitutional protection for abortion rights in America.

If Anduril, now operating a growing 40-person office in Australia to work on an initial $140 million navy contract, was to become involved in that kind of political battle, Luckey believes it would hurt its ability to work on areas such as national security. “You will inevitably degrade your ability to advocate for the things that are bipartisan,” Luckey says.

Anduril, which makes products such as anti-drone systems and autonomous vehicles, raised $US450 million at a $US4.6 billion valuation last year, though it is not profitable and Luckey will not reveal revenue figures.

He does take aim, though, at what he sees as gaps in environmental, social and governance (ESG) focused investors’ portfolios. The industry’s general aversion to the defence sector has come under increased scrutiny since Russia’s invasion of Ukraine made clear that conflict between major powers, albeit via proxies, is not a thing of the past.

“I think it’s almost inarguable that if Ukraine would have had a stronger defence industry and defence base… they would have been able to deter Russia from taking this first step that’s probably going to lead into many, many other steps… That would have done a lot more good, certainly for Europe, than almost any of the ESG investments that they made individually.”

“So I actually see it as an opportunity. I would love to see ESG funds saying: ‘You know what, national security is actually a thing that is important and that is something that we are going to look into investing in specifically because it can deter these much worse scenarios’.”

The argument against investing in defence companies is that their products can just as easily be used any government, and even when they sell to established democracies, such firms have an incentive to encourage military adventurism.

Luckey says which nations weapons firms sell to should be determined by elected leaders in their home countries. He defends the defence industry as one that creates a deterrent to conflict by making the cost too great to bear for the aggressor, though he concedes that assumes a degree of rationality from the antagonist.

But instead of supporting industries based on principle, he sees the ESG sector as one that champions causes such as the environment but will not back things such as nuclear power, which in his view, would be helpful.

“That’s my problem with ESG: people who are saying ‘I’m trying to save the environment’, but actually, they’re putting [money] into things that are environmentally related, but really, they’re just the things that they like for structural reasons or political reasons, or they’re friends with the right people.”

Then, with a laugh, he says, “I love the idea of ESG where they rank social good the way that I do, which is probably not surprising.”