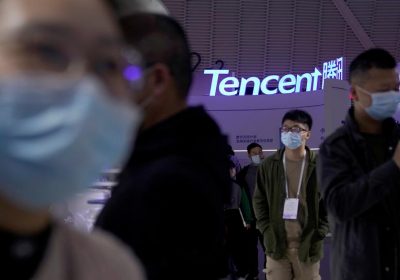 (Reuters) – Chinese gaming and social media giant Tencent Holdings Ltd on Wednesday reported a market-beating 26% jump in quarterly sales, helped in part by a surge in revenue from its online gaming business.

Revenue rose to 133.67 billion yuan ($20.5 billion) in the quarter ended December, versus market expectations of 132.19 billion yuan, based on data from Refinitiv.

Tencent, which has benefited from a surge in paying users for video games in China and international markets, said online games revenue grew to 39.1 billion yuan.

Profit rose 175% in the same period to 59.3 billion yuan, largely thanks to fair-value gains in companies Tencent has invested in, and sales of stakes.

Tencent is facing mounting competition from ByteDance, the owner of TikTok, and the similar short-video platform Douyin, which have made sizeable inroads into the video games business.

China’s tech giants have been faced this year by an unprecedented antitrust crackdown by authorities, which analysts fear could target other internet behemoths after first focusing on billionaire Jack Ma’s Alibaba business empire.