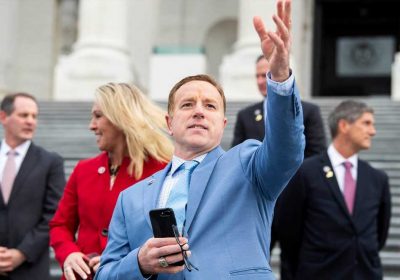 AOC vs. Hillary: Ohio race a proxy fight for future of Democratic party

A congressman who supervises the Defense Department’s tech spending dumped up to $250,000 worth of Microsoft stock two weeks before the Pentagon revealed it was canceling a $10 billion contract with the software giant, according to public documents.

US Rep. Pat Fallon, a Texas Republican who sits on a key subcommittee overseeing the Department of Defense’s technology policy, sold between $100,000 and $250,000 of Microsoft shares on June 21, government disclosures show.

Two weeks later, the Pentagon made the surprise announcement that it would cancel a $10 billion cloud computing contract — called JEDI, or Joint Enterprise Defense Infrastructure — that it had awarded to Microsoft in 2019 after the company fought a bidding war and legal battle against Amazon.

Fallon, who was elected last year to represent a northeastern district of the Lone Star State, is a member of the House’s Subcommittee on Cyber, Innovative Technologies, and Information Systems. According to the subcommittee’s site, Fallon and his colleagues have “jurisdiction over Department of Defense policy related to the acquisition of computer software.”

If members of Congress or their families trade stocks based on nonpublic information, they can be prosecuted under the STOCK Act passed in 2012.

In an audio recording that Fallon’s press secretary Luke Ball sent to The Post, the congressman said the trades were actually part of a bet that Microsoft stock would go up. On May 26, he said he bought 1,000 shares of Microsoft stock at $250.91. He said he then sold an option called a “covered call” to another investor and was paid $5,041 in return.

Fallon added that if he were aware of the Pentagon’s intention to cancel the JEDI deal, he would have bet on Microsoft stock falling rather than rising.

“If I had prior knowledge why would I have bought stock and only optioned it upward and only bet on an upward trend?” Fallon said. “I would’ve done the reverse, so it’s provably false.”

Columbia Law professor and securities law expert Joshua Mitts told The Post that the $5,041 payment Fallon received in exchange for the covered call may have been intended to help cover his losses if Microsoft stock fell.

Craig Holman, a governmental ethics lobbyist at progressive group Public Citizen, said it was likely that Fallon’s membership of the subcommittee meant he knew the Pentagon planned to cancel the Microsoft contract when he sold his shares.

“It has every appearance the Congressman had access to non-public information and cashed in on it,” he added.

In a statement, Fallon’s spokesman Ball countered, “Any accusation that Congressman Fallon acted inappropriately with his routine stock transactions is wildly speculative and has no foundation in truth. We challenge anyone to bring one shred of actual evidence to back up this ridiculous accusation.”

It’s not the first time that Fallon, sworn in just six months ago, has landed in hot water over his stock trades. In June, Insider reported that Fallon potentially violated federal ethics laws by failing to disclose up to $17 million in stock trades within 30 days of making them.

At the time, a spokesperson for Fallon claimed the congressman was “unfamiliar with how frequently members of Congress are required to file financial disclosures.” Fallon would comply with disclosure rules in the future, the rep added.

Other US lawmakers who have caught scrutiny over stock trades include House Speaker Nancy Pelosi (D-Calif.) — whose husband frequently trades big tech shares — and Sen. Ron Wyden (D-Ore.), who pushed legislation to boost the nation’s semiconductor industry while his wife bought stock in companies that stood to benefit.

To prevent potential conflicts of interest, Holman said all members of Congress and their immediate families should be banned from trading individual stocks.

“This is a classic example of why members of Congress should not be actively trading in the stock market while they sit in office, especially in stocks of businesses that they oversee in their subcommittee positions,” Holman said.

While Fallon’s sale of Microsoft stock may raise ethical questions, it did not appear to save him much money. Microsoft stock fell about 0.4 percent on news of the JEDI contract being cancelled and has since rebounded.

On the day Fallon sold his Microsoft shares, the stock was trading at $262.63. It has since risen nearly 8 percent to $282.95, according to MarketWatch data.