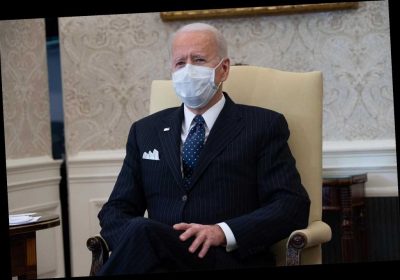 Woman in Gorilla Glue horror will ‘see a surgeon’ for removal

TikTok’s planned sale to American investors is unlikely to close any time soon as the Biden administration weighs whether to push the deal forward, a new report says.

A group of investors led by Oracle and Walmart announced plans to buy TikTok’s US operations last year after then-President Donald Trump ordered the video-sharing app’s Chinese parent company, ByteDance, to sell them.

But President Biden’s administration has put the plans on hold while it reviews its own approach to the cybersecurity risks posed by Chinese-owned apps, The Wall Street Journal reported Wednesday.

TikTok has reportedly continued discussions with the Committee on Foreign Investment in the US — which formally ordered the sale last year — about how to address the feds’ concerns about the Chinese government accessing American users’ data.

But any deal that gets made would likely look different from the one announced last September partly because TikTok is no longer facing the immediate threat of being banned in the US, according to the Journal.

It’s also possible that TikTok could work with a “trusted third party” to manage its data, which wouldn’t require the app to be sold outright, the paper reported.

The White House, TikTok and Oracle did not immediately respond to requests for comment Wednesday morning. But a spokeswoman for the White House’s National Security Council told the Journal that officials are working on “a comprehensive approach to securing US data that addresses the full range of threats we face.”

“This includes the risk posed by Chinese apps and other software that operate in the US,” the spokeswoman, Emily Horne, told the paper. “In the coming months, we expect to review specific cases in light of a comprehensive understanding of the risks we face.”

The TikTok deal has been in limbo for months as federal courts blocked the Trump administration from enforcing orders that would have effectively shut down the popular app.

The proposal announced last fall would have created a new entity called “TikTok Global” to run the app’s US operations. Americans would have owned a majority of TikTok Global, including 20 percent held by Oracle and Walmart and some 33 percent owned by ByteDance’s existing US investors, as The Post previously reported.