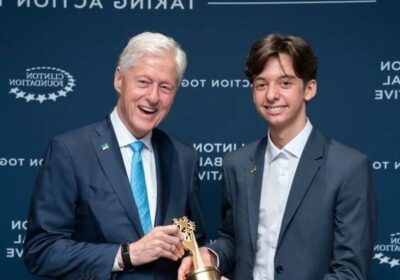 A Ukrainian teenager is building prototypes of an anti-landmine device he first started designing when he was just nine years old.

Writing for Metro, Igor said his research into the device began around the time Russia invaded Crimea in 2014. He began reading books about robotics and staying after school to talk about the project with his teachers.

Now 17 years old, Igor has been working on real-life prototypes of a gadget that could detect and clear landmines left behind in conflict zones.

Igor wrote: "I had never built a drone before, but I was determined to find a way to use robotics for demining.

"It may sound extraordinary to have spent my childhood this way, but it actually felt like the only rational thing I could do. So many Ukrainians I know, of all ages, have been doing what they can to protect our country."

Igor helped create a series of drone designs which use artificial intelligence to detect both anti-tank and anti-personnel landmines, and is now working on test products to try out in the real world.

Igor currently lives in Canada and, this year, he won the Chegg.org Global Student Prize for his project.

He says that he looks 'forward to returning to Ukraine, equipped with more knowledge to free my country, and the world, of landmines.'

Ukraine has one of the world's highest rates of civilian injury and death from landmines.

During this year's invasion by Russia, the Red Cross claimed that an 'evacuation route' for civilians proposed by Putin's forces had been lined with landmines.

Today, all eyes are on which has fallen into Russian hands and is being targeted by artillery.