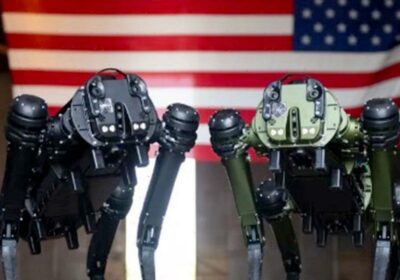 The US Space Force will begin using £123,000 robot dogs to patrol its Cape Canaveral rocket base.

The base, which is adjacent to the launchpad of many NASA and SpaceX missions, will install the robots as security patrols to save on 'man hours'.

Space Force operatives will use the Ghost Robotics androids as their 'eyes and ears' in classified areas of the base, and to monitor different areas for damage.

READ NEXT: WhatsApp users could be fined for sending 'banned' messages

The robot dogs could even come to Space Force's aid in the case of an emergency such as a fire or an evacuation.

The Space Force unit responsible for all launches from Cape Canaveral and the Kennedy Space Center reportedly carried out a two-day test on two Vision 60 unmanned robot dogs.

These robot dogs can operate autonomously or be taken over by a human using remote control. They're becoming increasingly popular with different branches of the US military.

In 2020, the US Air Force tested the robots. Major Jordan Criss said at the time: "These dogs will be an extra set of eyes and ears while computing large amounts of data at strategic locations throughout Tyndall Air Force base."

Criss added: "They will be a huge enhancement for our defenders and allow flexibility in the posting and response of our personnel."

Ghost Robotics, which makes the robot dogs, attracted some controversy earlier this year when it added a sniper rifle onto one of its hounds.

The company teamed up with weapons firm SWORD Defense Systems to unveil the SPUR, the 'Special Purpose Unmanned Rifle'.

It lets the robot dog walk around with a gun capable of taking out targets from up to 1.2KM away.