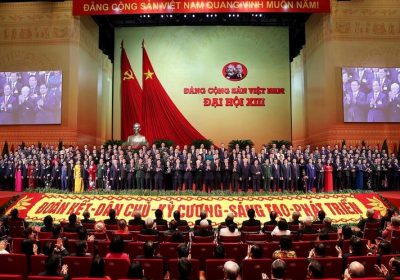 HANOI (Reuters) – Having sidestepped the worst of the coronavirus pandemic so far, Vietnam aims to rev up its economy over the next five years, trusting on its custom-tooled mix of free trade deals, privatisation and tight COVID-19 curbs.

Armed with a raft of free trade deals envied by regional peers and increasingly luring factories away from China, the ruling Communist Party on Monday formally approved ambitions to raise growth beyond an annual 6% in the pre-pandemic era to 6.5%-7.0% for the 2021-2025 period.

In an economic development blueprint confirmed at its five-yearly congress, it said it would boost its growing role as a key manufacturing hub for global giants like Samsung Electronics Co and Intel Corp. At the same time, the Party is targeting raising the country’s profile beyond a low-cost labour destination to a centre for science and technology.

With more than a dozen free trade agreements now under its belt, Vietnam aims to expand and diversify export markets, the Party said.

The country has reaped the benefit of China and the United States, its largest trading partners, being locked in a bitter trade war that has seen Western manufacturers look to move more and more of their production out of China – with Vietnam a popular choice.

Speaking after the congress, Party General Secretary Nguyen Phu Trong – re-selected to serve a rare third term as party chief on Sunday – said Vietnam would aim to be a fully developed country by 2045, and that an ongoing crackdown on corruption across party ranks would continue.

The lofty 2021-2025 targets come as Vietnam recoils from its worst outbreak of COVID-19 in nearly two months, a reminder that future success will depend in the short term at least on keeping the virus at bay.

Last year’s 2.9% growth would have been welcome in many countries around the world, but was the worst year in decades for Vietnam’s economy as it soaked up the impact of tight quarantines, border closures and other anti-virus curbs.

Despite the pandemic, in January, a unit of Taiwan’s Foxconn Technology Co Ltd, a key Apple Inc supplied, obtained a licence to invest $270 million in the country as it is moving some iPad and MacBook computer assembly from China. Meanwhile U.S. chipmaker Intel said it raised its investment in Vietnam by $475 million to $1.5 billion.

The country will “focus on measures to basically complete the elements of a socialist-oriented market economy, better handling the relationship between the state and the market and society,” according to the Party’s economic blueprint.

Analysts say that’s code for Vietnam continuing its drive to privatise state-owned enterprises, except for those operating in areas deemed essential for national security and defence.

The Party also said it will shift its focus on foreign direct investment (FDI) from quantity to quality, with a focus on environmental risks.