Home » Technology » With robot sculptors, who needs another Michelangelo?

With robot sculptors, who needs another Michelangelo? 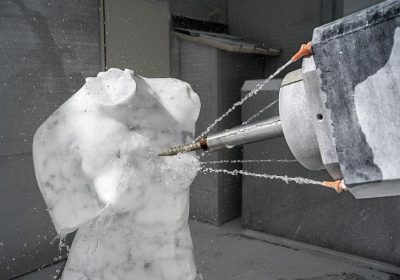 CARRARA • For centuries, the massive marble quarries above the Tuscan town of Carrara have yielded the raw material for the polished masterpieces of Italian sculptors like Michelangelo, Canova, Bernini and, most recently, ABB2.

Carving with pinpoint precision – and at least some of the artistic flair of its more celebrated (and human) predecessors – ABB2, a 4m zinc-alloy robotic arm, extended its spinning wrist and diamond-coated finger towards a gleaming piece of white marble.

Slowly and steadily, ABB2 milled the slab of stone, leaving the contours of soft cabbage leaves for a sculpture designed and commissioned by a renowned American artist.

ABB2 is hardly a lone robotic genius, toiling away in anthropomorphic solitude.

Just a few metres away, in a facility humming with robots, Quantek2 was rubbing away on another marble block, executing a statue envisioned by a British artist who had contracted out the manual labour to a robotic hand.

Since at least the Renaissance, the creative output of Italy’s artistic workshops has been among the country’s best-known and most valued exports. The founders and employees of this robotics lab believe that embracing advanced technology is the only way to ensure Italy remain at the artistic forefront.

“We don’t need another Michelangelo,” said 38-year-old technician Michele Basaldella, who calls himself the robots’ brain. “We already had one.”

One thing that hasn’t changed in hundreds of years, however, is artists’ sensitivity about who gets credit for their work.

In Florentine workshops, many artisans worked in obscurity, with a sculpture or painting created by many getting just one master’s signature. Now, it is Carrara’s robots working away anonymously. Many of the artists who use them demand that their identities be kept secret.

“Artists want to perpetuate this idea that they are still chiselling with a hammer,” said Mr Giacomo Massari, a founder of Robotor, the company that owns the sculpting robots. “It makes me laugh.”

The good thing about robots is that they cannot do everything.

Standing amid the quarry dust, and wearing sunglasses to block the glare bouncing off the tonnes of marble transported down from the nearby Apennine Mountains, Mr Massari, 37, argued that abandoning traditional handmade techniques was the only way to allow Italian marble sculpture to survive and thrive.

In three to four years they will be able to. And I will do something else. Maybe program a robot.

Carrara’s prosperity has long depended on the appeal of its marble to artists.

During the town’s Renaissance boom years, Michelangelo roamed the surrounding quarries for weeks to find the perfect piece of marble for his Pietà masterpiece.

In the 18th century, Carrara’s marble was transformed into scores of neo-Classical statues, and dozens of ateliers opened up here.

But among modern and contemporary artists, Carrara’s marble fell out of favour, the translucent, grey-veined stone becoming more the stuff of bathroom floors, kitchen counters and funerary monuments.

Mr Massari pointed out that many artists had dismissed marble as a medium because of the months or even years it took to complete a single statue by hand.

And fewer young people in Carrara were up for the crushing work of chiselling stone, not to mention the dust-eating and all the other health risks that came with it. It is said that Canova deformed his sternum by bending his chest on a hammer for hours.

At a warehouse down the mountain, where technicians were testing a gigantic robot, Mr Massari pointed at a reproduction of “Psyche Revived By Cupid’s Kiss”, a masterpiece of neo-Classical sculpture. He said: “Canova took five years to make this. We took 270 hours.”

Mr Massari and his partner initially bought their robots from local technology companies.

But as clients – including, among those who can be named, global stars like Jeff Koons, Zaha Hadid and Vanessa Beecroft – gave them what Mr Massari called “increasingly crazy” commissions, they started producing their own machines with homemade software and German parts.

Mr Basaldella, the technician, said many of his former art school classmates were excellent sculptors but did not stand out, because manual dexterity is not new or in demand. But robots can achieve groundbreaking results if they are built “with an artistic sensitivity”, he said, sitting in a control room where he inspected a 3D marble block scanned into his computer.

“I think our robots are a work of art,” he added.

He has even grown fond of some of his robotic collaborators, and is doing everything he can to save one of the lab’s first, “very tired” models from the scrapyard.

The robots are fast and precise, but not perfect. When one dug a deep crack from the forehead to the knee of a “Sleeping Hermaphrodite” reproduction for American sculptor Barry X Ball, Mr Basaldella almost fainted.

The best-known version of this ancient sculpture sleeps at the Louvre on a marble mattress carved by Bernini.

While Mr Basaldella cares enough about his robots that he started drawing up a horoscope for one, not everyone around Carrara shows the same level of empathy.

“If Michelangelo saw the robots, he would tear out his hair,” said sculptor Michele Monfroni, 49, in his workshop in the mountains near Carrara, where he sculpts Hercules reproductions, cherubs and the occasional police crest by hand.

“Robots are business, sculpture is passion,” he said.

Mr Monfroni picked up his first hammer at seven and virtually never put it down, refusing to employ machines, convinced that pulling a statue out of a marble block from scratch with one’s hands is what defines sculpture.

Far from saving the country’s artistic legacy, he said, Italian art risks losing its international appeal if it drops its handmade tradition.

He approached a life-size marble portrait of a topless woman – a present from the model’s husband for their poolside – and started smoothing her cheek with a pumice stone. “Sculpture is something you have inside,” he said. “If you use a robot, you also become a machine yourself.”

Mr Marco Ciampolini, an art historian and the director of a local museum, does not consider the use of robots a total break from the past, since many of history’s greatest artists, including Michelangelo, delegated a big part of their work.

“The idea of the artist working alone is a romantic concept created in the 19th century,” he said.

He added, however, that while he welcomed technological advances that facilitate the sculptor’s job, he still thought a human touch was necessary to preserve artistic value.

“Only a human knows when to stop,” he said.

In the Robotor workshop, Mr Massari said he didn’t disagree with that assessment. The human touch, he said, represents just 1 per cent of the work, but is essential.

In a nearby room, a dozen young, human sculptors were bent over some of the robots’ unfinished statues – including one designed by the mischievous Italian artist Maurizio Cattelan – refining the last details and fixing the inevitable imperfections left even by an intelligent machine.

“The good thing about robots is that they cannot do everything,” said Mr Emanuele Soldati, 26, a former sculpture student, as he smoothed some details of a marble cabbage.

“In three to four years they will be able to,” replied his colleague, Mr Lorenzo Perrucci, 23, as he traced holes in a marble sea sponge. “And I will do something else. Maybe program a robot.”