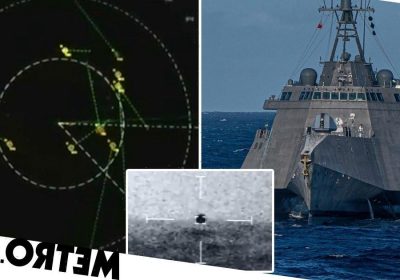 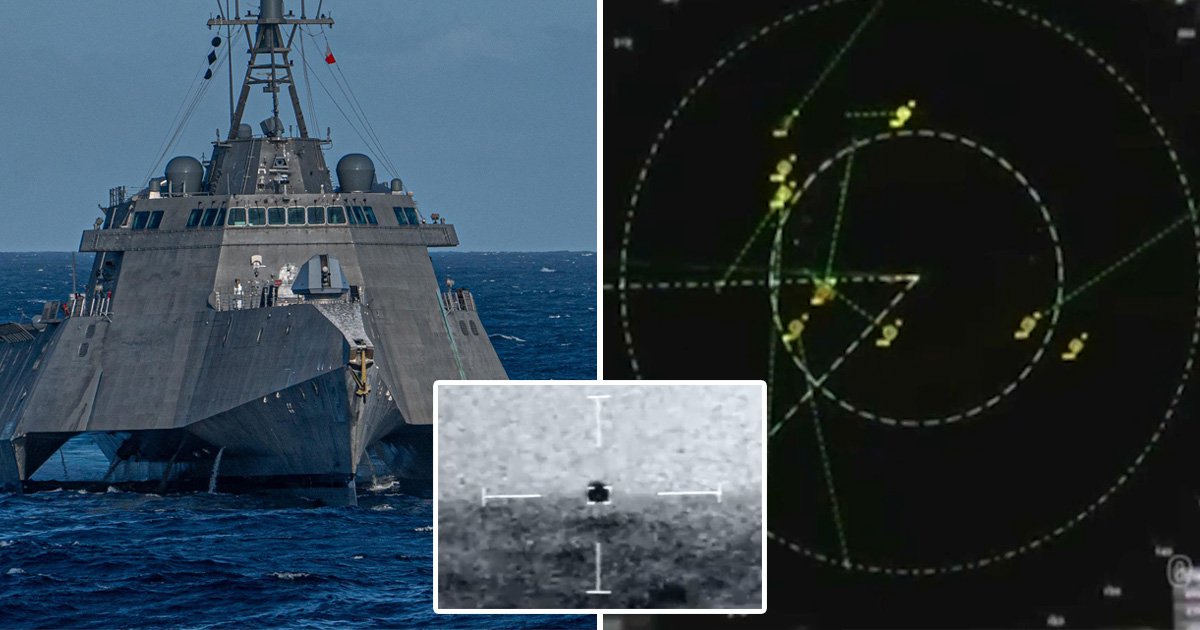 A dramatic video showing the moment a US Navy attack ship was swarmed by unidentified flying aircraft has been shared online.

The incident occurred back in July 2019, but is coming to light thanks to filmmaker Jeremy Corbell.

The footage shows the radar display from the USS Omaha as it is surrounded by as many as 14 UFOs flying as fast as 160mph.

This new video corroborates earlier footage shared by Corbell of the same incident.

That one showed what appeared to be spherical object floating above the ocean and was captured by sailors aboard the Omaha and other ships.

Corbell says he obtained this latest video of the radar screen from anonymous sources.

In the video, sailors can be heard off-camera observing the UFOs.

‘Holy s***. They’re going fast,’ one of the sailors is heard in the video saying.

He then adds: ‘Oh, it’s turning around.’

The video ‘shows and supports the idea that there were a multitude of unknowns warming our warships,’ according to Corbell.

Corbell said that the footage of the radar was obtained from an individual who works inside the Combat Information Center.

It was filmed by ‘a very special visual intelligence crews that came in’ and recorded the radar screens.

At one point, the radar showed as many as 14 unidentified objects, but Corbell declined to provide that footage.

He said releasing the radar video was to debunk speculation that the initial footage showing the apparent flying saucer was faked or could be explained as a ‘balloon dropping into the water.’

In April, officials from the Pentagon confirmed this event did indeed happen and the footage obtained by Corbell is genuine.

In a statement, a Pentagon spokesperson reportedly said: ‘I can confirm that the referenced photos and videos were taken by Navy personnel.

‘The [Unidentified Aerial Phenomena Task Force] has included these incidents in their ongoing examinations.’

Corbell explained there were several sightings from multiple ships on July 14 and 15 in 2019.

‘And by the way, on the other ships, they had different things that happened. So some were just like lights that did figure-eights and patterns and 90 degree turns. Others were like a different colour light, like red,’ he told the website Mystery Wire.

Increasing evidence is coming to light that senior US officials are aware of UFO sightings.

John Ratcliffe told US media the American government had evidence of known alien craft that can break the sound barrier without a sonic boom and perform maneuvers impossible with human technology.

‘And when we talk about sightings, we are talking about objects that have seen by Navy or Air Force pilots, or have been picked up by satellite imagery that frankly engage in actions that are difficult to explain,’ he told Fox News.

‘Movements that are hard to replicate that we don’t have the technology for. Or traveling at speeds that exceed the sound barrier without a sonic boom.’

‘When we talk about sightings, the other thing I will tell you is, it’s not just a pilot or just a satellite, or some intelligence collection,’ Ratcliffe said.

It has previously been confirmed that the US has studied a range of futuristic technologies which would allow it to exercise global military dominance for decades to come. The programme is dedicated to exploring ‘ unexplained aerial phenomena’ and is believed to have written a 490-page report which collects together UFO sightings from around the world.