After months of rumours and endless speculation WhatsApp has finally released its disappearing messages upgrade. This new feature basically allows users to send a message which will then self destruct after a set amount of time. It’s something fans of the service have been asking for for a while with WhatsApp confirming that it will be launching across the globe in the coming weeks.

Explaining more about this feature WhatsApp said: “Disappearing messages helps to keep chats private and more like a face to face conversation that is not recorded for all time. It will allow people to speak more freely and feel more comfortable being their full selves.

“This update will also help users better manage their storage as we know that removing messages from the chat can help save storage and make chats cleaner.”

Although disappearing messages are sure to be popular they do come with a warning as this is not a feature aimed at users who want to send a cheeky note to friends with the hope that it will then instantly vanish.

WhatsApp has set the disappearing message time limit at seven days meaning anything you send will still be available to read for a whole week. 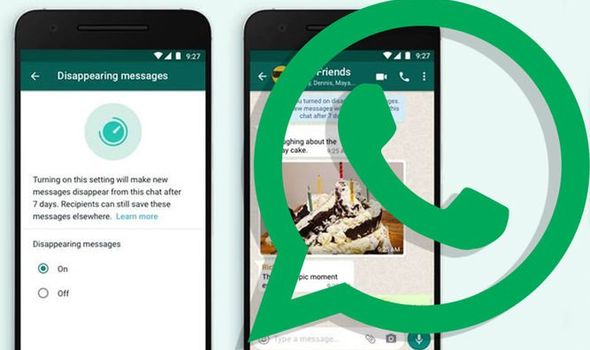 There are some other caveats which mean WhatsApp chat fans should use this feature with a level of caution.

WhatsApp says that if a user doesn’t open WhatsApp in the seven day period, the message will disappear. However, the preview of the message might still be displayed in the notifications panel until WhatsApp is launched.

You should also be aware that if you reply to a disappearing message, the quoted text might remain in the chat after seven days.

If a user creates a backup before a message disappears, the disappearing message will be included in the backup.

Of course, it’s also possible for a recipient to Forward or take a screenshot of a disappearing message and save it before it disappears.

And, if you send a picture with this feature the message will disappear but the image can remain on a device if the recipient has the autosave function switched one.

Despite all of these dangers disappearing messages could be very useful and should certainly help to keep your phone a little less full of clutter.

Just be aware that anything you send won’t magically be removed for a while so be careful what you say.