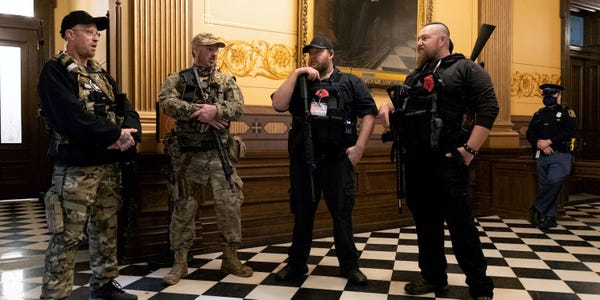 Two of the six suspects charged in a plot to kidnap and kill Michigan Gov. Gretchen Whitmer have been identified in pictures of far-right agitators invading the state Capitol earlier this year.

The two men and identical twins, Michael and William Null, were pictured standing in the Capitol's gallery on April 30, carrying long guns while protesting Gov. Whitmer's stay-at-home orders that were issued to stop the spread of the coronavirus.

The men appeared in official photographs of the incident. They were also pictured in a Twitter snapshot taken by state Sen. Dayna Polehanki, D-Livonia, that day.

The men's identity from the picture has been confirmed to Fox News by Michigan Attorney General Dana Nessel's office.

The twins are among six men charged by federal attorneys on Thursday for allegedly conspiring to kidnap Gov. Whitmer. Another man in this group, 23-year-old Daniel Harris, is a Marine Corps veteran.

Seven additional men were charged with terrorism-related crimes, including plotting to target law enforcement and attack the state capitol building.

According to FBI officials, the group had been plotting on social media channels since early 2020.

Authorities have accused the men of being part of a so-called militia group called the "Wolverine Watchmen."

In an affidavit, Brian Russell, a Michigan Department of State Police Detective Sergeant, described the suspects as "an anti-government, anti-law enforcement, militia group who have performed tactical training."

He said they had "made terroristic threats towards government officials and organizations and provided material support for planned acts of terrorism."

Far-right agitators expressed their anger with Whitmer's decision to carry out a statewide lockdown in the wake of the pandemic by descending on the state capitol last spring. Many of them were armed.

A day after the incident, Trump sparked outrage after tweeting that Gov. Whitmer should "give a little" and that the protesters "are very good people, but they are angry."On Friday, Whitmer said that the Trump administration had been made aware of threats made against her, but did nothing to reduce them.

"I have raised this issue with them (Trump Admin)… I was aware of a lot of the threats being made against me and my family and I asked for their help. They didn't do anything about it…Here we are. We are very close to a plot that was to kidnap me and to murder…" Whitmer told CNN's Erin Burnett.

Trump took aim at the governor on Twitter on Thursday, writing: "Governor Whitmer of Michigan has done a terrible job. She locked down her state for everyone, except her husband's boating activities. The Federal Government provided tremendous help to the Great People of Michigan.

"My Justice Department and Federal Law Enforcement announced…today that they foiled a dangerous plot against the Governor of Michigan. Rather than say thank you, she calls me a White Supremacist—while Biden and Democrats refuse to condemn Antifa, Anarchists, Looters and Mobs that burn down Democrat run cities…" the president added.

Speaking to reporters on Thursday, Gov. Whitmer said that she knew her job would be difficult but that she "never could have imagined anything like this," according to the Guardian.

Whitmer also said she hoped the criminal charges would "lead to convictions, bringing these sick and depraved men to justice," the Guardian reported.