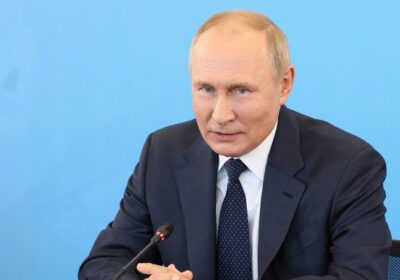 Vladimir Putin made a terrifying speech which included a shocking announcement and a deadly threat to the West – which mirrored one similar to when he declared war against Ukraine.

The crazed leader made a rare address to the public and announced the first mobilisation of his country since World War 2.

During the chilling speech, Putin accused the United States, the EU and Britain of persuading Ukraine to force military operations into Russia.

He said: "The West has engaged in nuclear blackmail against us.

"If its territorial integrity is threatened Russia will use all the means at its disposal to protect our people. This is not a bluff."

Much like his speech at the end of February which led to Russian tanks rolling into Ukraine, this speech sent alarm bells ringing across the globe.

Below are four horrifying announcements that Putin made during his threatening speech.

Nuclear threat to the West Putin announced that armed forces are operating across a frontline that exceeds 600 miles and in a hugely bold claim said they are opposing "not only neo-Nazi formations but the entire military machine of the collective West."

He is determined to stand up to what he sees as Western aggression, reports The Mirror.

He continued: "NATO is conducting reconnaissance across the south of Russia. Washington, London and Brussels are directly pushing Kyiv to move military action to our country.

"They are openly saying that Russia should be defeated on the battlefield by any means.”

Margarita Simonyan, editor in chief of state propaganda channel RT, tweeted that "judging by what is happening and what is about to happen" this week marks either the eve of "our imminent victory or the eve of nuclear war. I can’t see any third option.”

Putin continued: “This is not a bluff. And those who try to blackmail us with nuclear weapons should know that the weathervane can turn and point towards them.”

Putin said he made the decision to mobilise his citizens as a response to the "threats" they face and to protect "our motherland, its sovereignty and territorial integrity, and to ensure the safety of our people and people in the liberated territories."

Putin continued: “Military service will apply only to citizens who are currently in the reserve, especially those who have served in the armed forces, have certain military professions and relevant experience."

According to Russian Defence Minister Sergei Shoigu, 300,000 Russians would be called up as part of the mobilisation that will apply to “those with previous military experience”.

However, the mobilisation decree is very vague, making it possible to call up millions of Russian men as many have done mandatory military service after high school.

The announcement resulted in a mass exodus of Russians from the country. Airlines are selling out of flights out of the country, with flights from Moscow to Istanbul selling out completely.

Putin railed against so-called aggressive anti-Russian policy and said nations are constantly threatening their country and its people.

“The purpose of this West is to weaken, divide and ultimately destroy our country," he said.

"They are already saying that in 1991 they were able to break up the Soviet Union, and now the time has come for Russia itself that it should disintegrate. And they have been planning it for a long time." The warmonger announced that parliaments in the People’s Republics of the Donbas as well as the civil-military administrations in the Kherson and Zaporizhzhia regions will hold referendums on the future of the territories.

He confirmed that the Kremlin will do everything to ensure the referendums go ahead, "so that people can express their will."

Self-declared referendums are illegal under Ukrainian and international law and have widely been condemned as a precursor to the violation of Ukraine’s territorial sovereignty.

“We will support the decision on their future, which will be made by the majority of residents in the Donetsk and Luhansk People’s Republics, Zaporizhzhia and Kherson", he said.

The voting is expected to take place online, likely to make the results easier to forge.