Home » World News » A Nevada man is charged in the theft of more than 500 blank vaccine cards in Los Angeles.

A Nevada man is charged in the theft of more than 500 blank vaccine cards in Los Angeles. 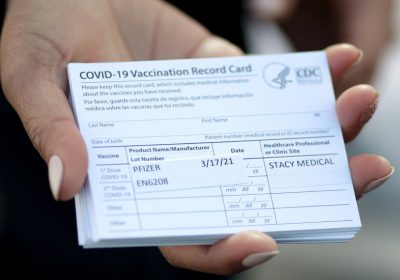 A Nevada man accused of stealing more than 500 blank Covid-19 vaccine cards from the Los Angeles vaccination site where he worked was charged on Wednesday with one felony count of grand theft, according to the Los Angeles County District Attorney’s office.

The man, Muhammad Rauf Ahmed, 46 of Las Vegas, had been arrested in April, but the charge was delayed as the police and prosecutors sought to determine the value of the cards, which was eventually judged to be “at least $15 apiece if illegally sold.”

Around the country, many bars, restaurants and businesses that operate under limited capacity have loosened restrictions for people who can prove that they have gotten the vaccine, creating an underground market for doctored or fraudulent vaccine cards.

Mr. Ahmed was a nonclinical contract employee hired to work at the vaccination site at the Los Angeles County Fairgrounds, where nearly 4,000 vaccines are administered daily, the La Verne Police Department, in eastern Los Angeles County, said in a statement on Tuesday.

On April 27, the department was contacted after a security guard at the site spotted Mr. Ahmed leaving with a batch of the distinctive cards in his hand, Detective Sgt. Cory Leeper said in an interview on Wednesday.

Officials recovered 128 cards from Mr. Ahmed’s vehicle, according to the police, and when questioned further, Mr. Ahmed acknowledged he may have taken additional cards. The police found 400 blank cards in the hotel room where he was staying. Mr. Ahmed was arrested. Efforts to reach him by telephone on Wednesday were not successful.

“Selling fraudulent and stolen vaccine cards is illegal, immoral and puts the public at risk of exposure to a deadly virus,” George Gascón, the district attorney in Los Angeles, said in a statement on Wednesday.