Home » World News » A religious event in Manila draws thousands, raising concerns that it might become a super-spreader event.

A religious event in Manila draws thousands, raising concerns that it might become a super-spreader event. 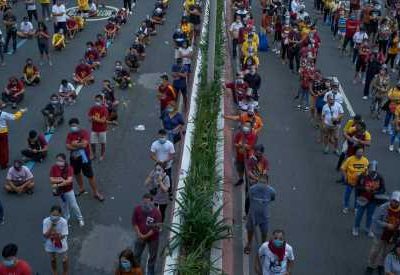 A religious event that drew nearly 10,000 people in Manila on Saturday risked becoming a super spreader of the coronavirus in the Philippines, whose infection numbers have been among the worst in Southeast Asia.

For the event, which celebrates the feast of the Black Nazarene, an ebony statue of Jesus Christ that many Filipino Catholics believe to be miraculous, the statue is traditionally marched around the city’s Quiapo district. Participants typically clamber over one another to wipe it with handkerchiefs in the belief that it makes wishes come true. Last year, over two million people joined the gathering.

Although Manila’s mayor, Francisco Domagoso, broke with tradition this year and kept the icon in a church, thousands of people nonetheless arrived to pray in the surrounding streets.

Security was tight, with police officers in full combat gear patrolling and reminding people about social distancing guidelines. Others carried batons as they struggled to direct the crowd.

The country’s health secretary, Francisco Duque, said in a statement that he had received reports early in the day of people violating health protocols, although he added that the authorities had been “quick to disperse” those gathered and “ensure strict implementation of physical distancing.”

Mr. Duque had earlier appealed to devotees to opt for virtual Masses rather than physically going to Quiapo.