London: British forestry officials are warning parts of London about an invasion of caterpillars whose long white hairs can trigger allergic reactions in humans that include skin and eye irritation, difficulty breathing and even anaphylactic shock.

Caterpillars of the oak processionary moth were spotted emerging from eggs in mid-April, according to the Forestry Commission, which oversees forests in England and Scotland. 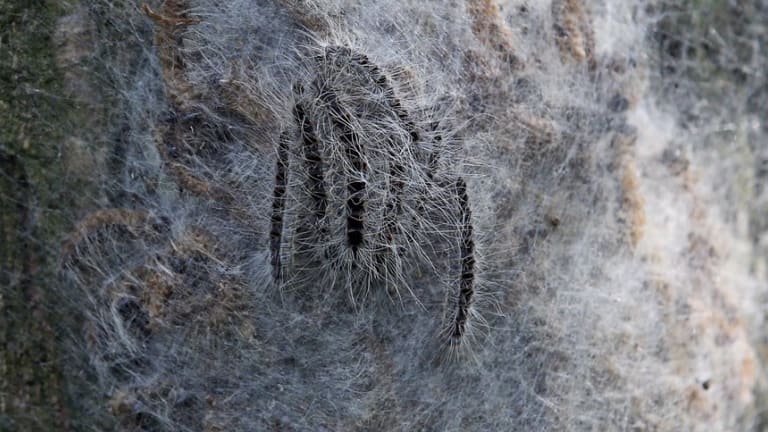 A nest of caterpillars of the oak processionary moth, in Hamburg, Germany, in 2014. Their bristles have a toxin that can cause skin irritations, allergies and asthma attacks in humans.

The caterpillars' hairs, which can be released as a defence mechanism or carried by the wind, contain thaumetopoein, an irritating protein, the commission said. Those who are allergic can become sick.

"At best, you can get contact dermatitis. At worst, you can die," said Jason  Dombroskie, manager of the Cornell University Insect Collection and coordinator of the Insect Diagnostic Lab in Ithaca, New York. "You can go into anaphylactic shock and have your airways close up. The airborne hairs set up a whole different ballgame."

British officials have issued similar warnings in years past as they have battled to stop the spread of the insect. This year, the Forestry Commission began treating trees in a "control zone" around the infected area with biopesticides, which use viruses or bacteria that mostly harm the target pest. The treatment is expected to continue through late May or early June, with trees at more than 600 sites expected to be targeted, the agency said.

"We advise people not to pick up the caterpillar or pick up the nest," a spokeswoman for Britain's Department for Environment, Food and Rural Affairs said, adding that there have been no reports of serious illness because of contact with the caterpillar.

Dr Robert Glatter, an emergency doctor at Lenox Hill Hospital in Manhattan, said the speed of the reaction after contact is typically slower than that of a bee sting.

He said each caterpillar has more than 62,000 toxic hairs, which after release can stay active for up to five years. "This is where the true toxicity of the caterpillar arises," he said, adding, "Word to the wise — it's best to observe their beauty from a distance."

The caterpillars build "distinctive white, silken webbing nests on the trunks and branches of oak trees" in the early summer and also leave "white silken trails", according to forestry officials.

Dombroskie said mature caterpillars have bodies that are dark on top and paler on the sides, entirely covered in dense hairs and "with scattered pale orangish spots".

In addition to being hazardous to some humans and animals, the caterpillars also feed on oak tree leaves and can strip the trees bare, leaving them vulnerable to pests, floods and droughts.

The oak processionary moth originates from southern Europe but is kept in check there by natural predators such as beetles, parasitic wasps, flies and pathogens such as fungi, Dombroskie said. Its name comes from its feeding almost exclusively on oak trees and its movement in what forestry officials called "nose-to-tail processions", in late spring and early summer.