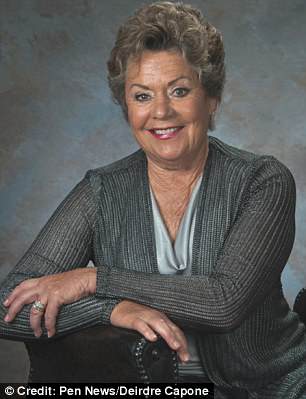 Deirdre Capone, now 78, is the last living relative of gangster Al Capone to have met him, and says he was a gentle soul

The last living relative of Al Capone to have known him personally says the mobster was innocent of his most notorious crime – and she can prove it.

Capone is widely remembered for the 1929 Saint Valentine’s Day Massacre, when seven members of a rival gang were lined up against a wall and shot in cold blood.

But Deirdre Capone, 78, remembers him as ‘Uncle Al’, the kindly younger brother of her grandfather Ralph ‘Bottles’ Capone.

In her book ‘Uncle Al’, she recalls him showing her a song on the mandolin and teaching her to swim.

She also recalls him picking her up and rubbing her back after she fell from an apple tree as a child.

And she says the infamous massacre he’s often blamed for is really the work of a handful of corrupt cops, annoyed at Bugs Moran and his North Side Gang.

She said: ‘To put it the way my family would say it, Bugs’ head got too big for his hat.

‘He thought that he was above anything, that he could do whatever he wanted, so he stopped paying the police for protection of his trucks, and the police were stealing alcohol off the back of the trucks.

‘And when Bugs’ men found out about it they were going to tell the police sergeant about it and these policemen of course would have been fired from their jobs. 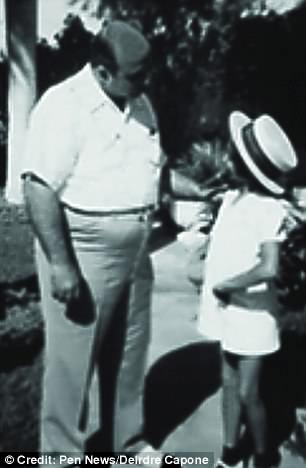 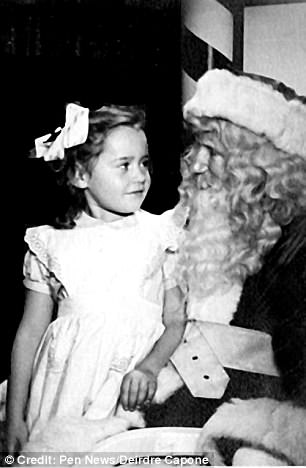 Deirdre recalls him as a kindly man who taught her to swim and played Santa at Christmas (right). She also claims he is innocent of the Saint Valentine’s Day Massacre, and that it was carried out by corrupt cops instead 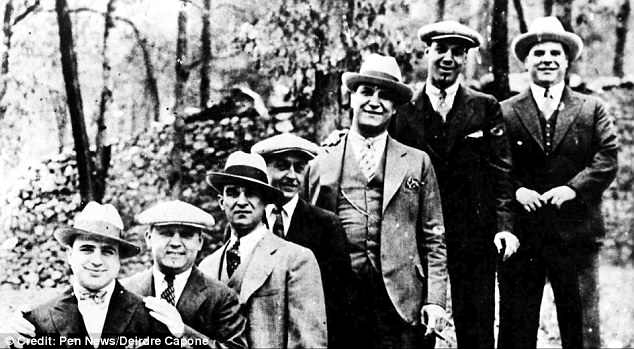 This picture shows Al Capone (bottom left) standing next to Bugs Moran, a target of the hit who narrowly escaped, who has his hands on Capone’s shoulders. Deirdre claims the image was taken weeks after the massacre and proves Al wasn’t behind it, otherwise the men wouldn’t be so familiar with each-other

‘So the police got upset that their livelihood was going to be cut off and that’s who did it.’

Witness accounts describe two men in police uniform entering the scene of the massacre – a garage at 2122 North Clark Street, Chicago – moments before it took place.

However, the so-called officers are widely believed to have been mobsters in disguise, acting on the orders of Al Capone, who was then in his mansion in Miami.

Moran himself was running late that morning and narrowly escaped the massacre, allegedly telling reporters afterward: ‘Only Al Capone kills guys like that.’

Deirdre continued: ‘Al’s youngest brother, my uncle Matty, was with another gangster and they wanted to see what the pattern of Bugs going into the garage was.

‘What they wanted to do was they wanted to go into the garage, talk to Bugs and just say “there’s enough business here for everybody, you don’t have to act like this, just play by the rules”.

‘And of course my uncle told me this myself, he said “Deirdre we were sitting in our car, and I saw this police car go up and down the street.

‘It would go down the street – it was filled with policeman – and it would go back up the street.’ 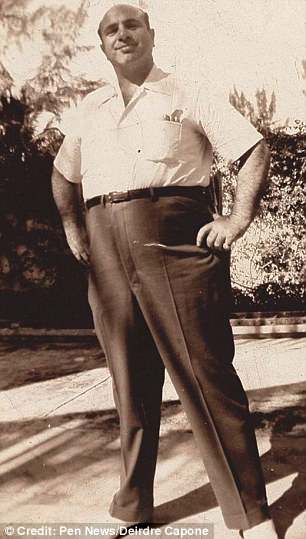 ‘And he says: “We got scared because we thought that they would arrest us for loitering, so we left”. It was the next day that the crime took place.

‘I’m convinced [it was surveillance by the police].’

As evidence she offers a photo allegedly showing Bugs with his arms round Al Capone shortly after the massacre – a photo she claims was taken in May 1929.

At this time, Mrs Capone claims, Bugs was living under the protection of her grandfather Ralph in Atlantic City, New Jersey.

Curiously, Deirdre’s husband Bob is actually the nephew of John May, one of the massacre victim’s.

And while Deirdre accepts that Al Capone was indeed a gangster, she says he was a ‘mobster not a monster’.

‘He was a big kid,’ she said. ‘He laughed at his own jokes, he thought he was funny. He would do funny things all the time inside the family.

‘He would blow smoke rings with his cigar and I would catch them on my finger.

‘He just loved singing, he loved laughing. He loved being a part of the family.’

She added: ‘I equate that part of American history to the Wild West.

‘In the Wild West, if you rustled somebody’s cattle or stole somebody’s woman, there was a price to pay.

‘That was the same thing that existed during prohibition. Anybody that got into the rackets at that time knew was expected of him or her.

‘If you broke the rules or you did something that would cause harm to the rest of your family, there was a price to pay.

‘But my grandfather one time was talking to me and tears were streaming down his cheeks, and he said “Deirdre, no child’s life was ever in danger, no woman did anything she did not choose to do on her own, and nobody had any danger unless they asked for it”. 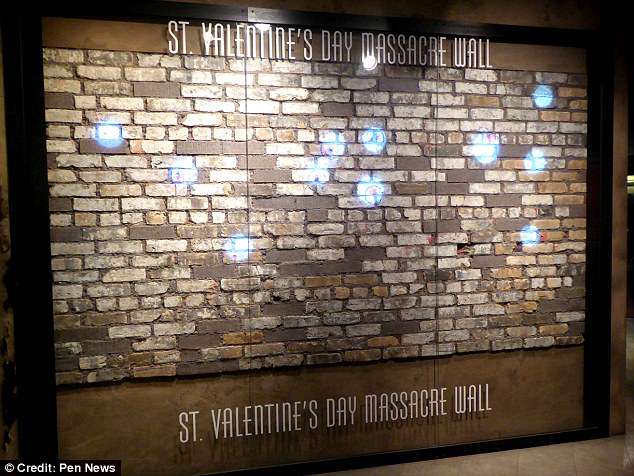 The Saint Valnetine’s Day Massacre saw seven members of the North Side Gang, rivals to Capone’s Five Points Gang, lined up against this wall in Chicago and shot

The killings were carried out with two Thompson submachine guns and two shotguns, with each victim shot multiple times

‘It wasn’t really as bad as people are led to believe that it was back then, but yes there was bloodshed, of course there was.’

The scene of the Saint Valentine’s Day Massacre was demolished in 1967 and now provides parking for a nursing home.

However the wall against which the victims were lined up and shot still survives, with bullet holes intact, at the Mob Museum in Las Vegas.

Despite all of the publicity around the Valentine’s Day Massacre, Deirdre said the first time she ever heard anything bad about her family was in 1947, when Capone died.

She said: ‘I was seven at the time and I was reading since the age of three, and all the newspapers all over the world were republishing all the things that they felt that the Capones had done.’

Soon after, Deirdre’s true identity was revealed to her schoolmates – they had known her as Deirdre Gabriel, the name her father, Ralph Capone Jr, had enrolled her with.

‘I’m a catholic girl, I was in Catholic school and Catholic children make their first communion in second grade,’ she said.

‘Sonnie, Al’s son, and Sonnie’s wife and girls… everybody came to church to watch me make my first communion and then we all went to Grandma Capone’s house for a big picnic afterwards. 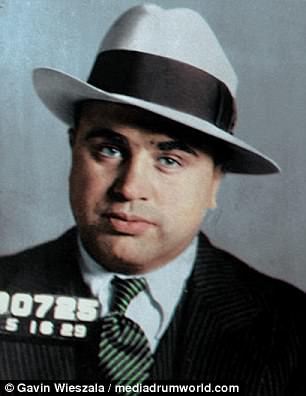 Capone was jailed in 1931 for tax evasion and served eight years before being released with syphilitic dementia. He died of a cardiac arrest in Florida in 1947

‘Well back in those days there was always local editions of the big Chicago papers.

‘They didn’t know me as Deirdre Capone, they knew me as Deirdre Gabriel. But how many Deirdres do you think were in the city of Chicago, let alone this little school with 30 students?

‘They knew. Two weeks after we made our first communion, every boy and every girl in my second-grade class was invited to this girl’s birthday party, but not me.

‘I would have a birthday party and nobody would come.’

Her name also cost Deirdre her first job, working for an insurance company.

She said: ‘After you had worked for this insurance company for six months you got a free life insurance policy and so I had to fill that application out in my legal name – I had to use Capone.

‘So two weeks after I made this application out, my boss called me into his office and sat me down and he says “what is your name?” And I knew something was up.

‘The outfit at that time was laundering their money and they would put it into insurance companies, into car dealerships and into restaurants.

‘This insurance company couldn’t take the chance that their investors would think that it was mob money that was going into this company, so they had to fire me.

‘But it hurt. I mean, it was just one more thing.’

Deirdre would later move to Minnesota, where she kept her Capone identity hidden from everybody except her husband, Bob.

Even her own children only found out about their heritage after telling their parents they were learning about Al Capone at school.

‘It was like somebody took a sledgehammer and hit me across the belly with it,’ said Deirdre. ‘I almost fainted.

‘And so I went to my husband and I said ‘honey, we’re going to have to tell the children their heritage before they find out about it from somebody else.’

‘I said, “kids, I’ve got something to tell you.” I said, “I was born Deirdre Marie Capone – Al Capone was my uncle”.

‘I have four children and the children looked at me, they looked at each other, and then they looked back at me and – this is the gospel truth – in unison they said “cool mom.”‘

Deirdre says she wrote her book to give a new perspective on the Capone family.

‘There’s no one left in the family that knew Al Capone, except me,’ she said. ‘So I have got to do it.’

Uncle Al Capone: The Untold Story from Inside His Family is available now from Recaplodge