Amanda Knox reveals her ‘puppy love’ for Raffaele Sollecito, friendship with ‘warm, welcoming’ Meredith Kercher and says she is unable to use Tinder or trust anyone because of notoriety of her ‘Foxy Knoxy’ persona in her new Facebook show

Amanda Knox has spoken of how she will never be able to be anonymous, use Tinder or make dark jokes because of the fallout from the ‘Foxy Knoxy’ persona she was given during her infamous murder trial.

Knox, 30, opened up about still not being able to trust people and how she continues to be haunted by the nickname in her new Vice Broadly show The Scarlet Letter Reports.

Her five-part series, which aired on Facebook Watch on Wednesday, looks at what it is like for women who have been shamed or vilified in the media because of their sexuality.

‘I don’t get to be anonymous ever. I think that’s a thing people don’t think about. I don’t get to swipe on Tinder, I don’t get to wear a t-shirt with a skull and cross bones, I don’t get to make a dark joke. I could not be certain that someone befriending me wasn’t doing so to get to me,’ she said of her life after the trial. 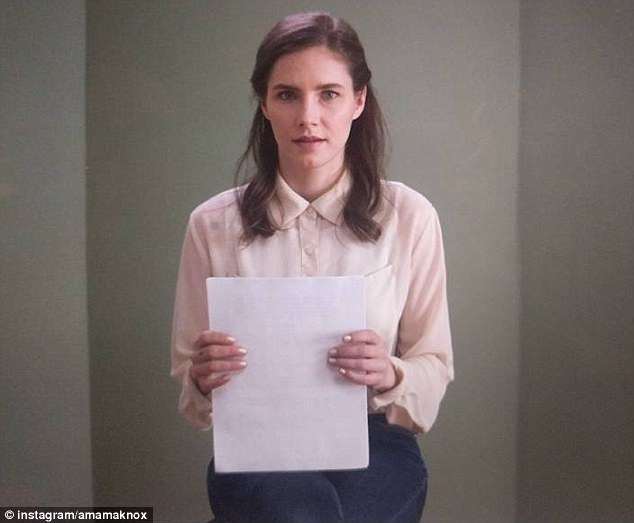 Amanda Knox, now 30, opened up about still not being able to trust people and how she continues to be haunted by the nickname ‘Foxy Knoxy’ in her new Vice show The Scarlet Letter Reports, which aired on Wednesday

‘For me, the most drastic challenge was finding love and feeling like someone loved me for me. I had to juggle being the Amanda Knox in the tabloid and the Amanda Knox just doing her thing.’

Knox was 20 and an exchange student from America when she became a global tabloid sensation after being convicted and later cleared of the 2007 murder of her British roommate Meredith Kercher in Italy.

‘I really appreciated her just being there and being with warm, welcoming presence.’

Knox told of how she met her Italian boyfriend Raffaele Sollecito when she and Kercher attended a classical concert one night. She described locking eyes and smiling at him before he ‘swooped in’.

‘I was in puppy love and we did everything together.’

Knox’s sexuality came under heavy scrutiny during the murder trial with prosecutors alleging that she and Sollecito killed Kercher in a drug-fueled sex game gone wrong.

She was quickly dubbed ‘Foxy Knoxy’ by the media and was referred to at the time as a ‘sex-mad American party girl’ and an ‘evil temptress’. 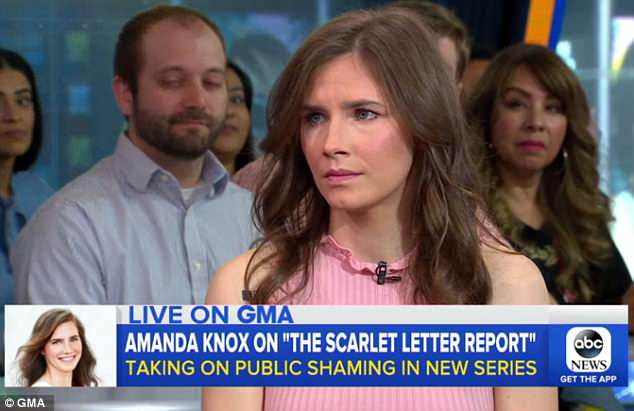 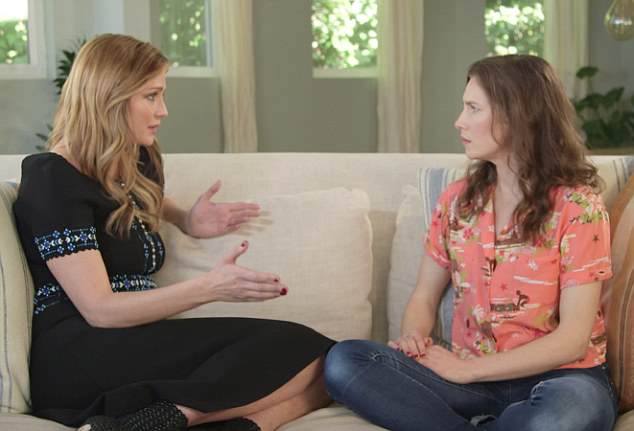 Amanda Knox is launching a new show for Vice in which she interviews women, including Mischa Barton, (pictured above) who have been vilified or shamed because of their sexuality

‘I could have been the kinkiest person in the world it and it shouldn’t have mattered because it has nothing to do with the evidence of the case,’ Knox told Newsweek ahead of her show’s release.

‘The fact that I was accused of orchestrating a rape game – it was so absurd.

‘The prosecutors and police looked at me and talked about me like I reeked of sex, that I was the weird, odd one out.

‘They took that to mean I was somehow guilty of something, instead of checking their judgment and letting the evidence speak.’

In an interview with Good Morning America on Wednesday, Knox said her Foxy Knoxy nickname often made it feel like she was living a double life.

‘I’m in a limbo space where Amanda Knox a real person exists and Foxy Knoxy an idea of a person exists,’ she said.

‘I’m constantly having to juggle how someone is interacting with me based on that two-dimensional version of me that has been in the public’s imagination for so long. 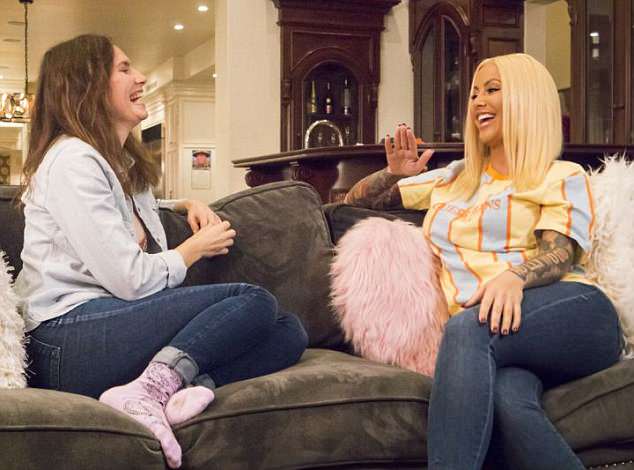 Knox wants to draw attention to other women who have been shamed because of their sexuality with her new show The Scarlet Letter Reports. One of the women she interviews is model Amber Rose (above) who has publicly shared her own experiences with ‘s**t-shaming’ 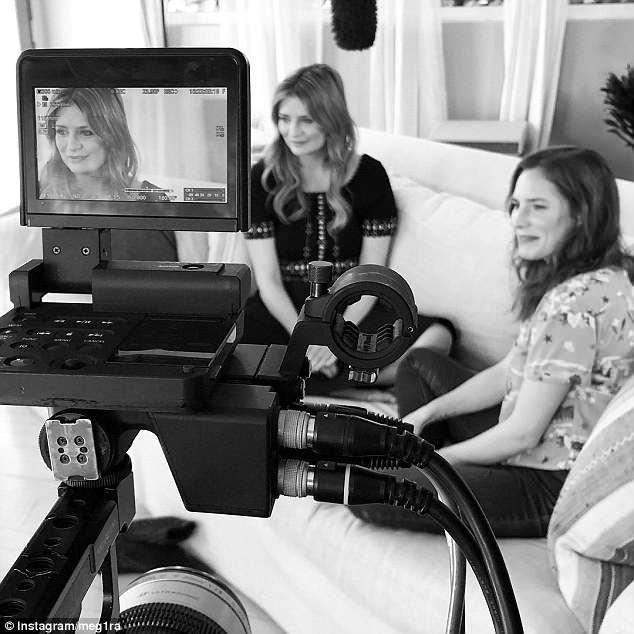 Knox’s show The Scarlet Letter Reports premiere’s on Facebook Watch on Wednesday. Pictured above is a behind the scenes look at her interview with Mischa Barton 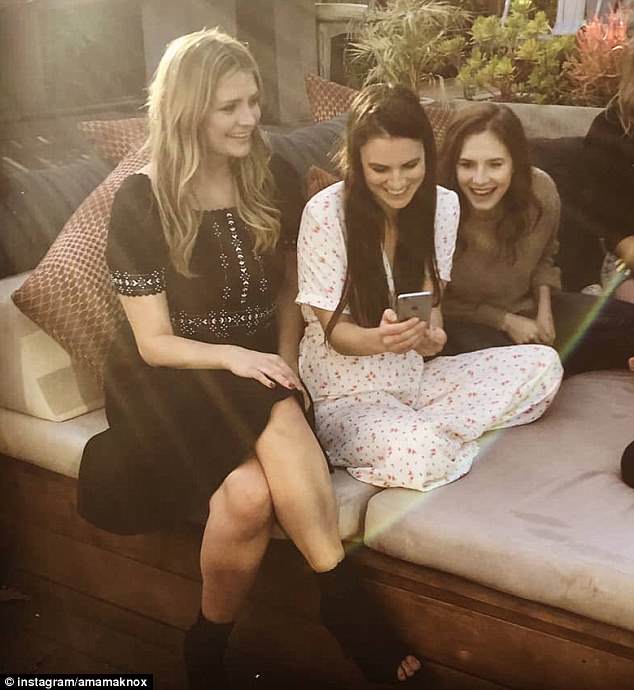 Knox now wants to draw attention to other women who have been shamed or vilified because of their sexuality with her new show The Scarlet Letter Reports.

The show, which is for Vice’s Broadly and will be broadcast on Facebook Watch, includes Knox’s interviews with women including Mischa Barton, Amber Rose and Brett Rossi.

The first woman to be interviewed as part of the series was Anita Sarkeesian – the founder of Feminist Frequency who was targeted online after launching a kickstarter fund to examine sexist video game portrayals.

Sarkeesian and Knox spoke candidly about the levels of harassment, which included death threats, and how they coped.

‘In the prison, in the thick of it, I would treat it as this tiny little kernel of a person inside of myself that I felt no one could touch me or hurt me. I felt numb. One of the things people complained about me when I got home was ‘look how cold she looks’. I had numbed myself,’ Knox said.

Sarkeesian agreed before speaking about how she chose to continue speaking out about sexism instead of giving up. 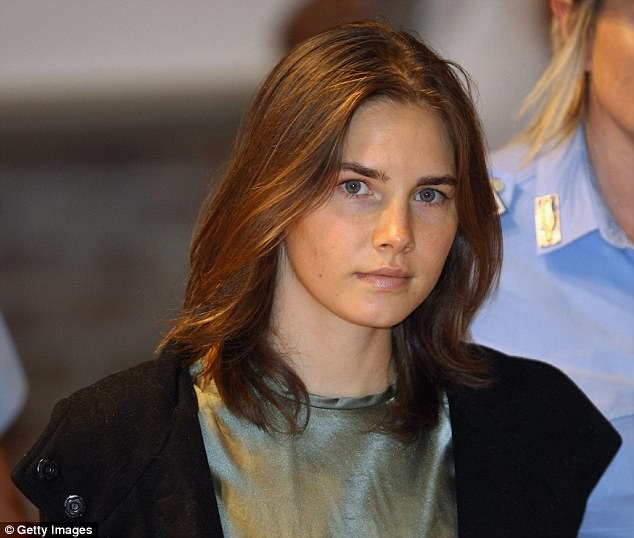 Knox, above in 2007, spent four years in an Italian prison after being convicted alongside her then-boyfriend in the 2007 stabbing death of her British roommate 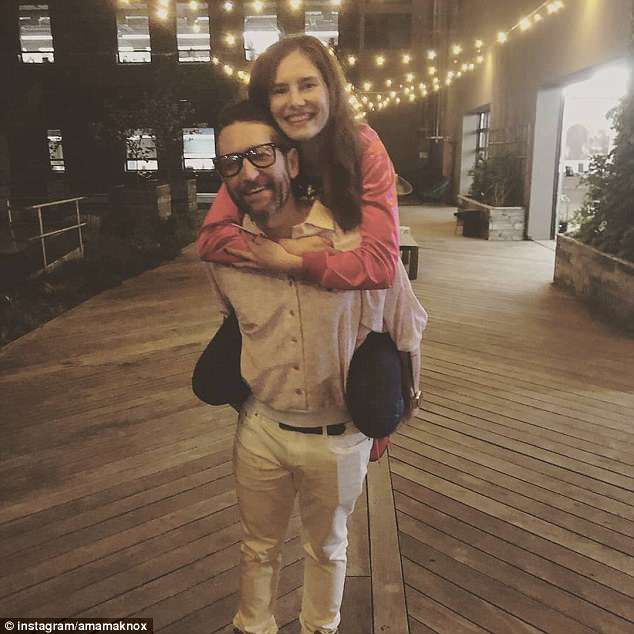 Knox was exonerated by the Italian Supreme Court in 2015 and then returned to Seattle to rebuild her life. She has been dating her author boyfriend Christopher Robinson since 2015

Knox said she came up for the idea for her new show before the #MeToo movement started in October 2017 when scores of women came forward with accusations of sexual harassment and rape.

‘It’s an incredible time to be a woman. We’re redefining what it means. I’m amazed and so grateful to be a part of it. I never thought I would be here,’ Knox told Newsweek.

‘Not too long ago, I thought I would be spending the best decades behind bars for something I didn’t do.’

Knox, a student from Seattle, spent four years in an Italian prison after being convicted alongside her then-boyfriend in the 2007 stabbing death of her roommate, British student Meredith Kercher.

She was exonerated by the Italian Supreme Court in 2015 and then returned to Seattle to rebuild her life.

Knox started dating and then got engaged to musician Colin Sutherland in 2015.