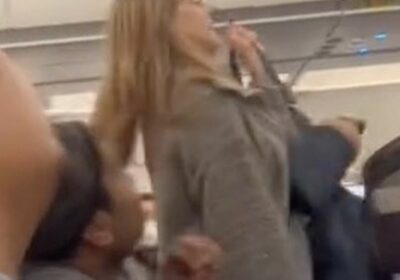 An angry woman has been dubbed a 'Karen' online after a video went viral of her telling passengers she hopes they 'crash and die' while being escorted off the plane.

It is unclear what happened to result in the unnamed woman being asked to leave the Spirit flight before it took off from Las Vegas Airport on Sunday (January 15) – but she certainly wasn't happy about it.

In the video, which was posted on social media by a passenger named Brad, she was seen walking off the plane with her belongings, followed by a male companion.

READ MORE: Shirtless brute brawls with another passenger on packed plane in row over front seat

Other passengers were heard heckling her – with one even booing her – to which the woman replied: "Boo you, b****. If you were in my position you'd do the same thing."

She then left the plane with the bloke as she shouted: "I hope you all crash and die."

The passengers were left horrified as the pilot stood up from his seat in the cockpit and marched out behind her.

Viewers have speculated that he was intending to request she be put on a No Fly list as a punishment for her morbid outburst.

However, the Daily Star has contacted Spirit about the incident but they are yet to give a comment.

The news comes after a topless man was filmed brawling with another passenger in an argument over the front row seats on a packed passenger plane.

In the clip, the shirtless thug appears to be trying to yank the other passenger out of his front-row seat on the Boeing 777 plane, while it is still grounded on the runway.

Music could be heard playing in the background as the pair were allegedly in an altercation over a seat allocation, reports have claimed.

It is unclear if either man was arrested for the disturbance.