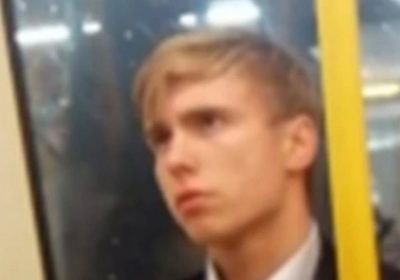 An NHS worker has had metal plates inserted into his face after being punched and pushed off a Tube train by an alleged anti-masker.

The victim was about to get off at High Street Kensington on the Circle line when he spotted a man not wearing a mask and confronted him.

They began to argue and the man punched him multiple times to the side of his head before pushing him off the train onto the platform and continuing to attack him.

The attacker caused such gruesome injuries that his victim was left with permanent damage.

He was left with a chipped jaw and three breaks to his eye socket and now has metal plates in his face that will be there for the rest of his life.

Police renewed their appeal on Crimewatch last night, releasing an image of a man they would like to speak to in connection with the attack at around 10 pm on October 3 last year.

The man is described as being white with blonde hair that was short at the sides and longer on top.

He is believed to be in his 20s and was wearing a navy-blue suit and light blue shirt.

He was also carrying a grey rucksack baring a blue Nike logo and a large green umbrella.

During the coronavirus pandemic, people are required to wear coverings over their faces on trains, buses, coaches, ferries, the Tube and onboard planes unless they have a medical exemption.

Possible exemptions include children under the age of 11 and those who are unable to wear a mask due to a physical or mental impairment or disability.

Anyone refusing to wear one can be denied travel or fined £200, which can double for each offence up to £6,400.

If you recognise this man you can contact British Transport Police by texting 61016 or call Crimestoppers anonymously on 0800 555 111.