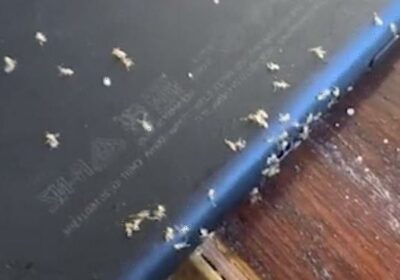 A Brazilian woman has shared her surprise after ants made a nest inside her Amazon Kindle device, and even started ‘buying’ books.

Journalist Mariana Lopes Vieira shared a video of the ants crawling all over the Kindle, which appeared to be emanating from the tablet’s charging port.

In the footage, hundreds of the bugs can be seen scurrying over the front and back of the infested Kindle and in and out of the hole at its base.

Vieira said she had put her kindle down for a few weeks to read a physical book. Once she finished, she wanted to return her virtual reading.

But when she want to pick up her Kindle, she found the ants had invaded it.

Writing a blog post about the incident, she said the ants had entered the charger hole and made a nest inside the device – rendering it unusable. 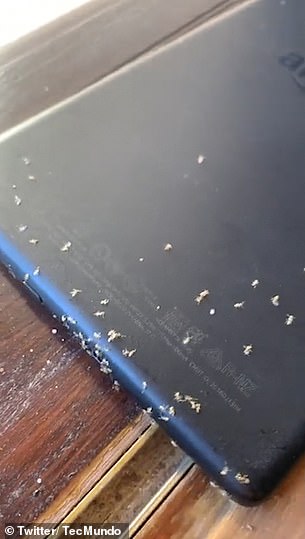 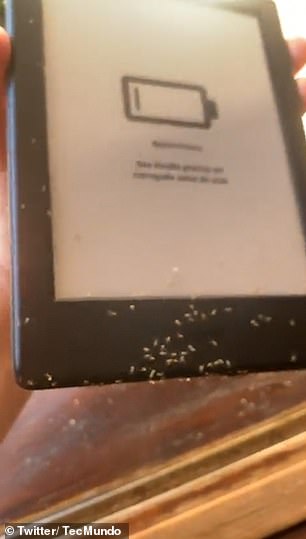 Brazilian journalist Mariana Lopes Vieira shared a video (pictured) of the ants crawling all over the Kindle, which appeared to be emanating from the tablet’s charging port. They had made a nest inside the device, rendering it unusable

‘I was desperate! I have several digital books, many of them are sold out titles in the physical edition, I thought it was gone’, the journalist wrote.

Vieira said the ants even changed from their usual darker colour to a ‘albino’ shade – suggesting those coming from the hole were young ants from the nest.

‘Ants, little red ants, started their diaspora out of the device, in a terrifying scene. After a while, the dots change colour and scale, and even smaller, albino animals run over each other. Puppies,’ she wrote.

She said she was even more shocked when she started getting email notifications saying two books had been purchased on her account.

The purchases had been made by the ants, she said, which had gotten into the casing of the Kindle and were causing it to send commands as if in use by a person.

Vieira said she had the ‘one-click purchase’ option enabled, meaning she can purchase books with just a single tap. This would have made it easier for the insects to trigger the device to make purchases, she said.

After seeing that the ants had ‘bought’ two books: ‘Robots and the Empire’ and ‘The Ring of Gyges: An Ethical Fantasy’, she quickly used her computer to disable the one-click buy option on her Amazon account.

However, because of the infestation she found that many of the tablet’s other functions were not working, or causing it to carry out other unwanted actions – such as eBook pages turning by themselves.

Her friend, writer Fabiane Guimarães, shared her video on social media. Her post gained more than 66,000 likes and sent the name of Amazon’s e-book reader to the top of Brazil’s trending list on Twitter.

‘Kindle uses a capacitive touch, which detects capacitance changes on the display so it knows where the touch was made,’ the Mechatronics Engineering graduate said. He explained the ant’s movements were registered by the devices as touches.

‘The ants, in large numbers, can change the capacitance of the tracks and the equipment understands that there was a touch or some gesture on the screen.’

Another owner of an Amazon Kindle also went viral for the same issue, posting a separate video on TikTok of their ant-infested device.

Renata Alves Frederi went a step further, however, and demonstrated how to clear the Kindle of the infestation of ants – first banging the device on a surface to clear it of as many ants as possible before opening its casing up while spraying a fabric sheet with ant killer.

She then placed the kindle on the sheet and waiting for the ants to slowly craw away in an attempt to escape from the spray and eventually die from the fumes.

Ms Vieira, meanwhile, said she put her device in her freezer to freeze the ants.

Experts have said that neither method will be foolproof, while both could damage the device, with Amazon explaining to the tech website that customers ‘should also not use their devices near sinks or wet places (if their model is not waterproof) and should not leave them exposed to extreme heat or cold.’

Some species of ants, such as the Nylanderia fulva (Raspberry Crazy Ants) that originate in South America, tend to hide in small placed that generate heat. As a result, electronic devices can be a popular nesting place for such bugs.