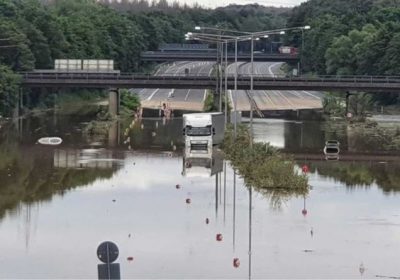 Weather experts said rain seen in the region over the last 24 hours has been unprecedented as Germany reels from the sight of destroyed buildings, upended cars and stranded citizens. The adverse rainfall has been put down to a near-stationary low-pressure weather system, which also brought sustained heavy downpours to the west of France, Belgium and the Netherlands. Chancellor Angela Merkel expressed her shock and grief for the scale of the flooding, saying she “grieves” for those who have lost their lives in this “disaster”.

Are Germany floods being caused by climate change?

While it’s hard to pinpoint the exact source for the flooding, climate change undoubtedly has something to do with it.

Bernd Mehlig, an environment official from North Rhine-Westphalia, told reporters that the situation was only ordinarily seen in the depths of winter.

Mr Mehlig said: “Something like this, with this intensity, is completely unusual in summer.”

The weather system brought down a staggering 148 litres of rain per square metre within 48 hours, to a part of Germany that averages 80 litres in a month.

During a visit to the area, he forewarned: “We will be faced with such events over and over, and that means we need to speed up climate protection measures on European, federal and global levels, because climate change isn’t confined to one state.”

Climate change is one of the central themes in Mr Laschet’s election campaign, alongside all things environmental.

Terrifyingly, extreme weather events are becoming more and more frequent around the world, even within countries and territories that have previously been very mild.

Global climate change has already had observable effects on the environment.

Glaciers have shrunk, ice on rivers and lakes is breaking up earlier in the year than supposed to, while plant and animal ranges have shifted and trees are flowering sooner than normal.

Effects that scientists had predicted in the past would result from global changes in the climate are happening right now – loss of sea ice, accelerated sea level rise and longer, more intense heatwaves in countries that never used to have them.

Changes in rainfall levels are expected to continue as the effects of climate change deepen across the planet.

For example, the average rainfall in the USA has increased since 1900 but some areas have seen much greater increases surpassing the national average, while some regions record a downturn.

More winter and spring rainfall is projected for the northern part of the US within this century, while in the south it’s the opposite.

Sea levels have risen by about eight inches since reliable records began in 1880, and they’re expected to rise another one to eight feet by the time 2100 comes around.

This is the result of added water from melting land ice pouring into the sea coupled with the expansion of seawater as it warms.

NASA writes: “In the next several decades, storm surges and high tides could combine with sea level rise and land subsidence to further increase flooding in many regions.

“Sea level rise will continue past 2100 because the oceans take a very long time to respond to warmer conditions at the Earth’s surface.

“Ocean waters will therefore continue to warm and sea levels will continue to rise for many centuries at rates equal to or higher than those of the current century.”

While climate change is spoken about widely, it’s difficult for many to imagine the real-life implications and it’s hard to picture being affected by something so momentous – but it is happening.