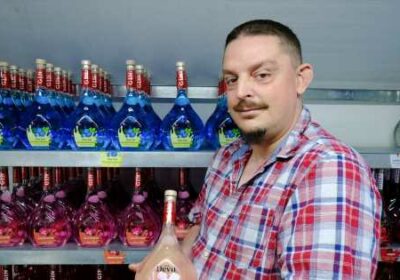 A couple who started making their own gin as a hobby during lockdown have set up "England’s smallest distillery", in their garden shed.

Stewart Bridge – who lives with autism – and Claire Ashford produce nine gins, including the most popular marshmallow and glitter flavour, as well as super-hot chilli vodka.

They now produce 500 bottles of spirits a month after receiving their official brewing licence – with Stewart claiming it has improved his mental health.

The couple make their booze from their refurbished shed in the garden of their bungalow in Irchester, Northants, and believe they are the owners of the smallest distillery in the country.

Stewart, 39, said: “I think we might be the smallest fully licensed distillery in England. I’d been producing my own beer, wine and cider for a long time, then during lockdown we discovered gin.

“I used to absolutely hate gin, I was a whisky man. I started going to local gin and rum festivals.

“You get quick results, roughly within 24 hours. With beer it takes months.”

The couple invested £40,000 into their business, which they called Little Devil Distillery, and kitted out their 10ft by 28ft shed at their home with fermenters and stills last year.

They currently sell to bars and supermarkets and have recently sold their 200th bottle but have applied for a licence to sell to customers online.

Stewart said he and fiancee Claire experimented with more than 100 gin flavours before developing the top nine which include the popular marshmallow tipple which is 45 per cent proof and costs £39.99.

He added: “We wanted some flavours that are common so that people recognise it. And we wanted some out there ones.

“I made the marshmallow gin and thought it looked dull. Some friends suggested edible glitter so we tested loads of different colours of glitter.

“When people taste it and I see their eyes toll into the back of their head, it’s such a great feeling to know that my product has touched their brain.

"Food and drink is really quite a personal experience.”

For more shocking stories from the Daily Star, make sure you sign up to one of our newsletters here.

Stewart was diagnosed with autism as a child but he says making his wacky gins has improved his mental health.

He said: “I was frequently called a ‘little devil’ as a child. I was an undiagnosed ‘brat’ and expelled from so many schools.

“That’s the reason why I called the business Little Devil Distillery."