Home » World News » Bank holiday weather forecast: How hot will it get this weekend?

Bank holiday weather forecast: How hot will it get this weekend? 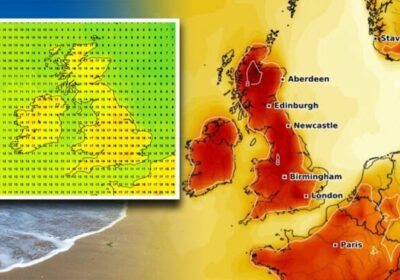 Over the Easter bank holiday, largely “unsettled weather” has been predicted so far. However, there appears to have been a shift as conditions are now forecast to be a lot drier and warmer for a majority of the UK, only risking the chance of the odd shower here and there.

The UK has suffered a spectrum of weathers these past few weeks, with temperatures reaching highs of 20C, to only be hit with thunderstorms, hail, and in some areas, up to 2cm of snow shortly after.

However, conditions seem to be stabilising over the course of this week into the next, as the UK should now expect a drier and more mild Easter weekend.

But by the weekend, it said conditions would be “mainly dry with some sunshine,” but low cloud is will plague the more coastal areas as we draw closer to the weekend, with occasional rain in the northwest.

From Saturday, the northwest is due to remain more cloudy with isolated light rain in areas.

Although, “low cloud may still linger along some coasts where temperatures may be suppressed. Some showers are possible in the southeast.”

This warmer air drawn up from France will be a contrast to the recent Arctic air mass conditions much of the country has seen in the last week.

However, the Met Office warns it could also bring a number of weather fronts and unsettled spells, particularly in the west, over the weekend.

Deputy chief meteorologist Dan Rudmant said: “It’s bit of a mixed picture as far as weather is concerned over the long Easter weekend, although feeling warm in places, at least early in the weekend.

“A low-pressure system to the northwest of the UK will bring unsettled weather to the north with some strong winds likely and rain in the northwest, which could impact driving conditions for some.

“However, further south it will be drier, especially in the southeast, although there will be varying amounts of cloud.

“Temperatures are likely to be above average for the time of year, although low cloud might keep temperatures lower in coastal areas.”

The southeast is predicted to reach highs of 17C to 19C over the Easter weekend, whereas the areas in the north of England and Scotland will see slightly cooler temperatures ranging from 14C to 17C.

Wales is also due to see much drier weather, with temperatures ranging from 15C to 17C, as will areas of Northern Ireland, which will see temperatures of around 15C.

As the week goes on, showers are predicted to be more likely in the north and west, with more average temperatures for the time of year.

More settled conditions are predicted to prevail in the southeast, with temperatures due to feel “quite warm” for spring, pushing into the low 20Cs.

Although, the Met Office warns there may be the odd shower and persistent low cloud in coastal areas, which will keep them cooler.