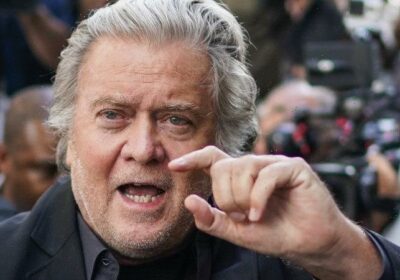 New York: Steve Bannon, a onetime top strategist to former US president Donald Trump, has been indicted on money laundering and conspiracy charges in connection with Trump’s effort to build a wall along the US-Mexico border.

Bannon, 68, was charged in an indictment made public on Friday morning (AEST) with two counts of money laundering, three counts of conspiracy and one count of scheming to defraud. 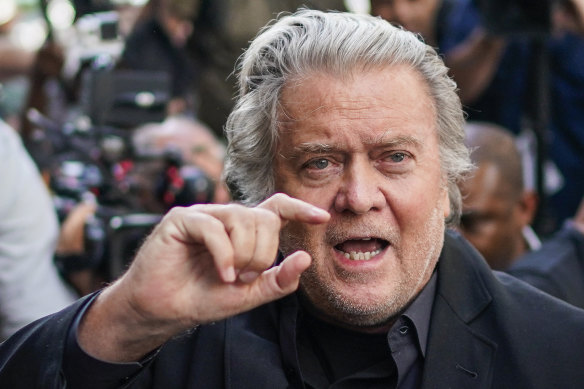 He was accused of defrauding donors in what prosecutors have described as a private multimillion-dollar fundraising drive, known as “We Build the Wall,” to help build the former Republican president’s signature wall.

According to the indictment, Bannon concealed how the drive’s chief executive was receiving hundreds of thousands of dollars of donor money despite promising not to take a salary.

The chief executive has been identified in court papers as Brian Kolfage, an air force veteran who pleaded guilty in April to federal wire fraud conspiracy and tax charges, and is awaiting sentencing.

“Stephen Bannon acted as the architect of a multimillion-dollar scheme to defraud thousands of donors across the country,” Manhattan District Attorney Alvin Bragg said in a statement.

“It is a crime to turn a profit by lying to donors.”

The office of New York Attorney General Letitia James worked with Bragg’s office on the probe. James and Bragg are Democrats.

“This is an irony,” Bannon said outside Bragg’s office, where he surrendered to face the charges.

“On the very day the mayor of this city has a delegation down on the border, they’re persecuting people here (for trying to) stop them at the border.”

Bannon, Kolfage and two other men had been charged by federal prosecutors in August 2020 with defrauding We Build the Wall donors.

Bannon pleaded not guilty to that indictment, including to charges he diverted close to $US1 million ($1.4 million) for personal expenses.

But his indictment was dismissed after Trump pardoned Bannon in January 2021, in the final hours of his presidency.

Presidential pardons, however, cover federal charges and do not prohibit state prosecutions.

Bannon is being charged less than two months after being convicted of contempt of Congress for defying a subpoena from a House of Representatives committee probing the January 6, 2021, attack on the US Capitol.

Weisselberg pleaded guilty in August to a variety of tax charges, and the Trump Organisation faces a trial scheduled to start in October.

Bannon is not the first former Trump ally charged in both federal and state court.

In March 2019, Vance brought fraud charges against former Trump campaign chairman Paul Manafort that were similar to charges on which Manafort had been convicted in federal court and sentenced to 7½ years in prison.

But a New York judge dismissed the charges nine months later because they amounted to double jeopardy, or trying someone twice for the same conduct.

Double jeopardy may not apply to the Bannon case because he never went to trial on the federal charges.

Another of Bannon’s former federal co-defendants, Andrew Badolato, also pleaded guilty over the We Build the Wall scheme, while a judge in June declared a mistrial in the case of the final defendant, Timothy Shea.

He now runs the popular podcast War Room and often hosts guests who deny that Trump lost the 2020 election to Joe Biden.