The BBC weatherman said outbreaks of scattered showers are to be expected as we head into the weekend. Ms Taylor predicted wetter conditions starting on Friday morning in northern parts of England and the Pennines as he warned of gusty winds in southern areas of the country. Over the weekend, the meteorologist also said drier conditions and outbreaks of sunshine can be expected in parts of the UK.

Mr Taylor said: “The showers are dotted around because we’ve got low pressure nearby, but the longest spell of heavier rain is all linked to this weather front, which will be marching its way Southwards and Eastwards.

“But morning rush hour gets wetter and wetter for some of you in Northern England, particularly the Western side of the Pennines, North and West Wales.

“Gusty winds with it, and a few isolated showers to the South, many though will be dry through this morning and early afternoon. 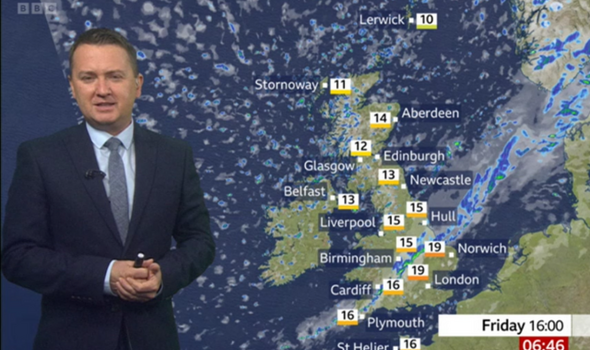 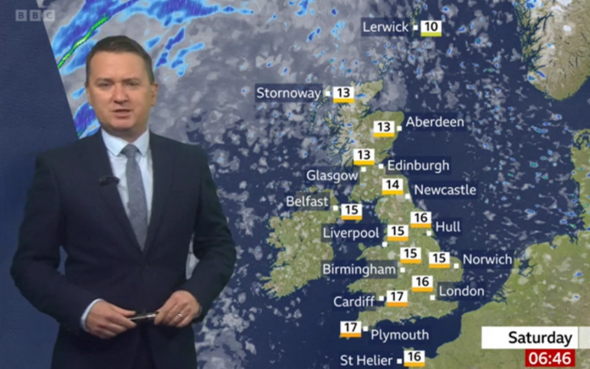 Mr Taylor added: “That rain band spreading through Wales, clearing here by the time we get to mid-afternoon sitting there across the midlands by this stage.

“Sunshine and showers making their way to the North, the winds got a little bit more West to North Westerly and that will bring a drop in temperatures.

“So probably a peak in the temperature early this morning or into the lunchtime period then dropping, warmest of all we’re seeing the driest for longest, East to the South-East.

“But we could see winds gusting close to gale-force around that band, a narrowing band so it will be a shorter spell of rain as it pushes through East Anglia and South East through the evening rush hour.

READMORE:’Putin is not joking’: Biden warns world risk of nuclear ‘armageddon’ highest since 1962

Mr Taylor said: “And then drier for the night and many Southern Eastern areas in particular.

“And with that lighter winds tonight, it’s going to be a colder night than the night just gone.

“So a bit of a fresh start to Saturday, a few showers dotted around in the North and the West first thing lighter showers though.

“But this is an area of high pressure, high pressure descending there and trying to stop most of those shower clouds forming. 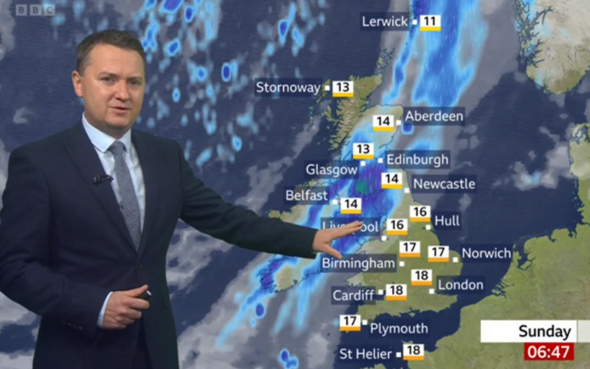 Mr Taylor added: “So a drier day, Saturday looking lovely actually for many and plenty of sunshine around.

“There will be a few showers in Western Scotland, Northern Ireland and maybe North-West England.

“But more far fewer compared with what we’ve seen through today.

“Temperatures are down a little bit after that fresh start but still pleasant enough in the sunshine.”