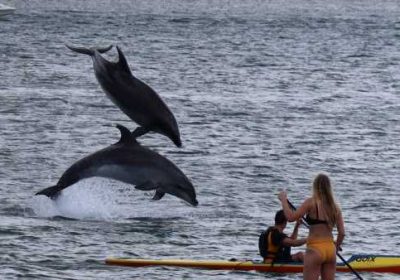 Rachel Cauldwell was in the right place at the right time to snap these dolphins gracing the waters of Pilot Bay in Mt Maunganui.

Cauldwell said the dolphins appeared shortly before 4pm on December 30 and swam among kayakers and paddle boarders for at least half an hour.

“They were just swimming along and then out of nowhere one just burst through the water into the air. It was incredible,” Cauldwell said.

“And then others joined in, they were jumping around for a couple of minutes.

“There must have been at least six of them. It was pretty surreal. Everyone on the beach was just watching them.”

It is not known who the paddleboarder is in the photo but Cauldwell posted the photos to a local Facebook group trying to seek her out as she thought she might like them.

Brad McNamara says he is the kayaker seen in the water that afternoon and said a group of around 10 paddle boarders, kayakers and swimmers gathered around the dolphins.

“The aerial displays looked like they had been trained in a circus. Absolutely amazing,” McNamara said.

“Coastguard were there keeping an eye on things, ensuring the safety of the public and making sure no one was getting too close.