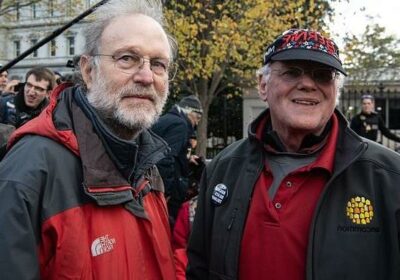 The woke founders of Ben and Jerry’s yesterday claimed that Unilever is violating a 22-year-old merger deal by selling ice cream to an Israeli license holder and have said: ‘We can’t sit idly by.’

In a televised interview with MSNBC, Ben Cohen said: ‘That agreement gave authority over the social mission to the independent board of Ben & Jerry’s. Unilever has usurped their authority and reversed the decision that was made and we can’t allow that to happen, we can’t sit idly by.’

Cohen’s business partner Jerry Greenfield said that the agreement is legally binding and must be adhered to.

But Unilever has said that it retains the right to make operational decisions for Ben and Jerry’s and that the sale cannot be undone as it has irrevocably closed. 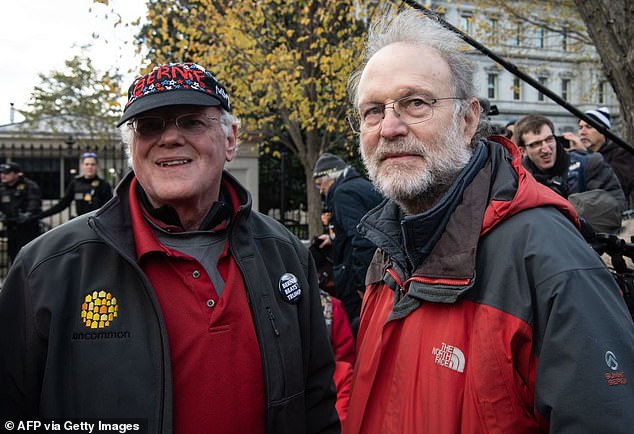 The woke founders of Ben and Jerry’s yesterday claimed that Unilever is violating a 22-year-old merger deal by selling ice cream to an Israeli license holder and have said: ‘We can’t sit idly by.’ Pictured: Ben and Jerry’s founders Ben Cohen and Jerry Greenfield

It comes after Ben and Jerry’s lost its bid in August to stop Unilever from selling its ice cream in West Bank settlements.

The company took the unusual step of seeking an injunction after Unilever announced it had sold its interest in the ice cream to an Israeli license-holder.

But a US federal judge ruled the ice cream company had ‘failed to demonstrate’ the move to sell the goods in the areas caused it ‘irreparable harm.’

After the ruling, Ben and Jerry’s earlier this month said that it plans to amend its lawsuit challenging Unilever’s sale of the Israeli business in Federal court in Manhattan.

Unilever has until November 1 to respond.

Ben and Jerry’s had decided to end sales in Israeli-occupied Palestinian territories in July 2021.

They said it was ‘inconsistent’ with the progressive values and social mission it retained the right to promote.

Their decision prompted a backlash against Unilever which included divestments by pension funds from the consumer goods company and accusations of anti-Semitism by some Jewish groups.

Despite their decision, their Israeli license-holder Avi Zinger had continued to produce the ice cream in Tel Aviv and distribute it to Israeli settlements, against the wishes of the Ben and Jerry’s founders.

Hundreds of thousands of Jewish settlers live in the occupied West Bank and east Jerusalem, in communities widely regarded as illegal under international law. 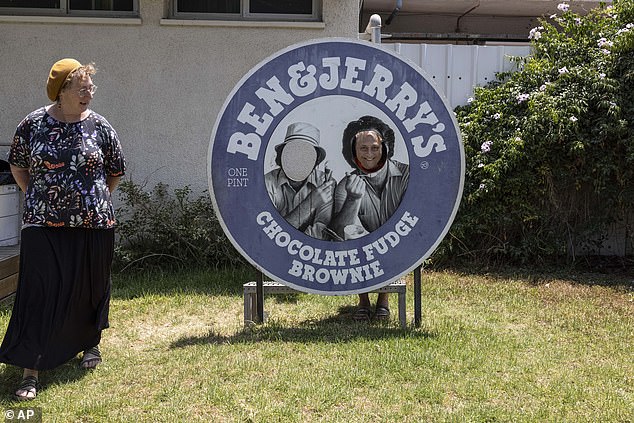 On July 5, Ben and Jerry’s asked that any agreement allowing distribution or sale of its products in the West Bank be dissolved and that any further such transaction go before its board of directors to be given a green light.

Unilever’s decision was ‘made without the consent of Ben & Jerry’s Independent Board,’ and goes against the merger agreement that gave the board the ability to protect the founder’s values and reputation, the complaint said.

However, US District Court Judge Andrew Carter Jr in Manhattan said the idea the company’s messaging could be marred or customers could become confused about its core values was ‘too speculative.’

Founded in the United States in 1978, Ben & Jerry’s is known for championing progressive causes, including protecting the environment and promoting human rights, and has frequently released special ice cream flavors to support causes or in protest.

Who are Ben and Jerry? Self-proclaimed hippies who started one of the world’s most recognizable ice cream brands before selling out to Unilever 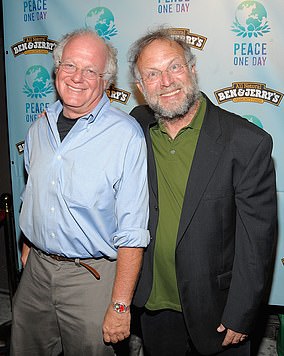 Cohen was born in Brooklyn, New York, and raised in the town of Merrick, on Long Island. Cohen first met and befriended his future business partner Jerry Greenfield in a seventh grade gym class in 1963. In his senior year, Cohen found work as an ice cream man before leaving to attend Colgate University in Hamilton, New York.

Over the next decade, Cohen pursued his interest in pottery and dropped out of college after his sophomore year. He also worked as McDonald’s cashier, Pinkerton guard, deliverer of pottery wheels, mop-boy at Jamesway and Friendly’s, assistant superintendent, ER clerk, and taxi driver, before settling on work as a craft teacher at a private school for emotionally-disturbed adolescents. While teaching at the Highland Community School, Cohen began experimenting with making his own ice cream.

Greenfield grew up on Long Island and attended Merrick Avenue Junior High School, where he met Ben Cohen in 1963. Greenfield and Cohen both attended Calhoun High School and remained friends until they both graduated and left Long Island to attend college. Greenfield chose to pursue a pre-med curriculum at Oberlin College. At Oberlin, Greenfield began working as an ice cream scooper in the school’s cafeteria.

Greenfield lived with Cohen in Saratoga Springs, New York during the summer of 1977. They decided to go into business with each other in May 1978, the two men opened Ben & Jerry’s Homemade Ice Cream Parlor in Burlington, Vermont. They initially intended to start a bagel business, but found the equipment costs prohibitive and switched to ice cream instead.

They chose Burlington as a location because it was a prominent college town which, at the time, had no ice cream shop. They took a five-dollar correspondence course in ice-cream making and opened their first store in a former gas station. Ben & Jerry’s opened in the summer of 1978.

Ben & Jerry’s distinctive style of ice cream was developed to compensate for Cohen’s anosmia, as he kept adding larger and larger chunks to the ice cream to satisfy his need for texture in food. Ben & Jerry’s became popular in Burlington.

Ben & Jerry’s was sold to Marmite and Dove soap maker Unilever for $325million in 2000. Reports indicate that Greenfield pocketed $9.5million while Cohen took away $41million.

Both Cohen and Greenfield are still paid to represent the brand, though neither has formal responsibilities.

Speaking in 2015, Greenfield said: ‘Oh yes, I’m definitely an ageing hippy. Many people think the hippies were irresponsible but we really believed in all that stuff about peace and love and caring for each other; we still do. And we still try to make a difference.’

He added: ‘Ben & Jerry’s continues to have an anti-corporatist and anti-authoritarian outlook on all the big issues we care about, such as climate change and social values, and remains outspoken when it’s important.’

Cohen turned his new-found wealth and prominence toward a variety of social causes, generally through the Ben & Jerry’s Foundation. The Foundation receives 7.5 per cent of all Ben & Jerry’s pre-tax profits and distributes funds to organizations such as the Anti Displacement Project.

Cohen debuted a special ice cream flavour called ‘Bernie’s Yearning’ on January 25, 2016 out of support for Sanders. Ben & Jerry’s released a statement disavowing connection or support for the product.

On April 18, 2016, Cohen was arrested, with Greenfield, while at a Democracy Awakening protest in Washington, DC. On February 21, 2019, Cohen was named a national co-chair of Bernie Sanders’ 2020 campaign.

In 2018, in protest against the Trump administration, the company rebranded one of its flavours Pecan Resist ahead of the midterm elections.  The company said Pecan Resist celebrated activists who were resisting oppression, harmful environmental practices and injustice. As part of the campaign, Ben & Jerry’s said it was giving $25,000 each to four activist entities.

In the wake of George Floyd’s killing, in June 2020, the brand spoke out in support of the Black Lives Matter movement after a wave of protests. It encouraged people to ‘tackle systemic and institutionalized racism’, and said: ‘All lives do matter. But all lives will not matter until black lives matter.’

A few weeks later, Ben & Jerry’s joined other global brands in pulling advertising from Facebook as part of the ‘Stop hate for profit’ campaign, and urged the social network to impose stricter measures on hate speech.

In August, the company faced a boycott in the UK and was slammed for ‘virtue signaling’ after it hit out at Home Secretary Priti Patel over her treatment of migrants crossing the English Channel.

In September 2020, the brand launched a podcast about American white supremacy, titled Who We Are: a Chronicle of Racism in America.