At least four, including the one seen firing from Zaporizhzhya on Monday, arrived in the last week of June. The remainder are meant to arrive before the end of this month.

On Monday, the Ukrainian ministry of defence released footage of a rocket launcher firing from the middle of a highway somewhere in the Zaporizhzhya region, the rockets arching high into what looked like an early evening sky.

Russia is currently firing an estimated 20,000 artillery rounds a day compared to Ukraine’s 6,000 rounds, according to Ukrainian officials cited in a recent report by the Royal United Services Institute (Rusi).

Devastating howitzer and rocket barrages inflicted heavy casualties during the three-month battle for Severodonetsk and Lysychansk, and ultimately forced Ukraine to retreat from the Luhansk region over the weekend.

Ukraine cannot match the Russians gun for gun, even with Western weapons. 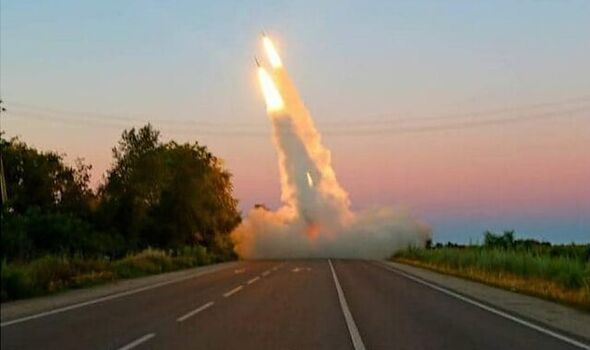 However, by targeting the ammunition supply chain, they hope to starve the enemy of shells.

The Himars have certainly been working overtime since Oleksiy Reznikov, Ukraine’s defence minister, announced their arrival on the battlefield on June 23.

On Monday morning alone, Ukraine had claimed three more strikes on ammunition dumps in the Donetsk and Kharkiv regions.

The chaos continued on Tuesday, with thick pillars of smoke rising over Donetsk, the regional capital occupied by Russia in 2014, as the Ukrainians targeted the railway station and a nearby vehicle repair workshop.

Deprived of the ability to lay down thousands of shells a day, the theory goes, Russia will be unable to replicate its grinding advance through the Luhansk and its assault on Donetsk region will stall.

Jack Watling, a Rusi researcher who authored the report, said: “It is a solid concept that should work as long as the Russians are not using precision-guided munitions, because the way they are using artillery they cannot help but have ammunition dumps.”

He added: “We will see in the coming weeks if it works.”

The deliveries have once again highlighted a gap between what Ukraine says it needs and what the West is able or prepared to deliver.

Andriy Zagorodnyuk, a former Ukrainian defence minister who has been involved in talks about arms procurement from the West, told the Telegraph: “It is an excellent piece of equipment.

“We can probe deep into the front. But the short answer is no, it is absolutely not enough. We need tens of them.

“If we had more, we would go after their equipment, their own artillery units, their own multiple rocket launches – and then we would be able to stop the offensive and secondly return the dynamic and start to move them out. That was the idea.

“Unfortunately at the moment, it is completely unclear when most of that stuff is coming and it is unclear what we are going to get.”

Ukraine has received a smorgasbord of Western and former Soviet weaponry from its Western allies since the war began, but often later and in smaller numbers that Kyiv would like.

Recent deliveries include M777 howitzers and Himars missiles from the US, Caesar 155 mm howitzers from France, M270 multiple rocket launch systems from the UK, and Bushmaster armoured vehicles from Australia.