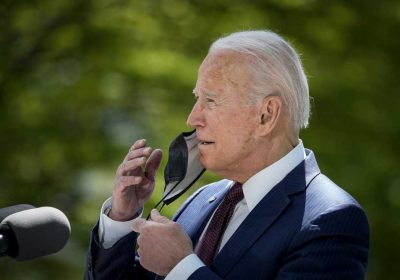 President Biden on Tuesday wore a face mask to a sparsely attended, outdoor press event at the White House — where he hailed new CDC guidelines eliminating the need for face coverings at such gatherings.

The president’s appearance on the North Lawn was designed to herald the eased mask restrictions for people — such as himself — who are fully vaccinated.

After walking to the podium in the black face covering, Biden took it off and said, “Starting today, if you’re fully vaccinated and you’re outdoors, you need — and not in a big crowd — you no longer need to wear a mask.”

The president was later asked by a reporter what kind of message he was sending by wearing his mask even to the podium.

“By watching me take it off and not put it back on until I get inside,” the president replied.

White House press secretary Jen Psaki was pressed on the issue at a later media briefing — including over whether the president would be appearing more frequently without his mask.

“Certainly, he’ll be following public health guidelines,” she said. “So I think you saw him outside today, he took the mask off. He didn’t put the mask back on. It will take some time to adjust and adapt for all of us.”